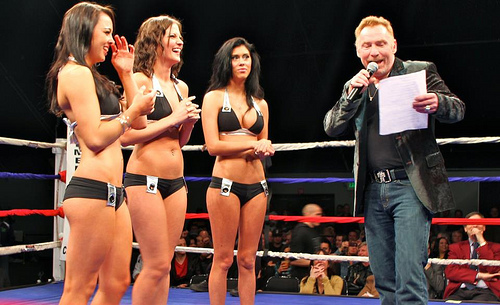 Lightweight hopeful Jose “Loco” Hernandez took another step in the right direction after pounding out a unanimous decision over Peter Oluoch on March 31 at the Emerald Queen Casino in Tacoma.

Headlining the 86th edition of Halquist Productions’ “Battle at the Boat,” Hernandez picked his spots but did so with bad intentions, firing vicious shots every time he moved his hands. Oluoch had his moments and hung in tough, but Hernandez’ hard punches ultimately earned him the victory. Hernandez, of Fort Worth, TX, improves to 13-5-1 with 5 wins by knockout. Oluoch, a Kenya native, is now 11-6-2 (6 KO’s).

In the co-featured bout of the evening, crowd favorite Nate Serrano (a retired Marine) got back in the winner’s circle by stopping 6-foot-2 Nick Balestra in the second round of their welterweight affair.

The towering Sacramento, Calif., native briefly silenced the pro-Serrano crowd by scoring a flash knockdown in the second, but the tides quickly turned. Serrano, who hails from nearby Yakima, popped up immediately and decked Balestra. Balestra made it back to his feet but had no time to recover, meeting the canvas seconds later after being tagged by Serrano. The game visitor attempted to make it back to his feet, but fell through the ropes, which forced the referee to stop the bout at 1:54.

Fans were also entertained by Halquist Productions’ new ring announcer Danny Bonaduce.
“This was a very good event,” said promoter Brian Halquist. “None of the fights were boring, Danny was awesome as the emcee and most importantly, the fans had a great time.” The next edition of “Battle at the Boat” takes place June 2 at the Emerald Queen.