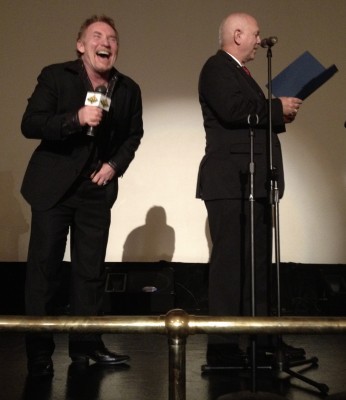 Why Puyallup? I asked Bonaduce that as he was about to take the stage. “Because I’m the mayor. That’s actually semi-factual,” Bonaduce said. The crowd began to chant, “Danny! Danny! Danny!”

Apparently, Bonaduce has taken to proclaiming himself the mayor of the Pierce County city on his KZOK 102.5 radio show. So he was a little surprised when the real mayor of Puyallup, Rick Hansen, walked on stage.

But Hansen wasn’t mad. He had a proclamation to read naming June 27 “Danny Bonaduce Day” in Puyallup. Actually, he proclaimed it “Donny Bonaduce Day.” The mayor, who clearly did not grow up watching “The Partridge Family,” kept referring to Bonaduce as “Donny” throughout his presentation. This amused Bonaduce to no end, especially when the audience started to chant, “Donny! Donny! Donny!”

Hansen then presented Bonaduce with a key to the city. “Which, by the way, can be used as a bottle opener,” Hansen added.

As if things weren’t surreal enough Hansen revealed that he is an actual Bigfoot hunter. “I’m probably the only mayor on the West Coast that’s been on an official Bigfoot hunt,” Hansen told the crowd.

Bonaduce arrived at the Liberty Theater in a black stretch limo. A red carpet, complete with Bigfoot footprints, was waiting for him as was a person dressed in a Bigfoot costume. Bonaduce spent the next hour greeting and posing for photos with fans, even Puyallup police officers.

“I pull up to anything with my picture on it and cops and I get scared,” Bonaduce said.

The movie, filmed in Carnation in January, is a horror film. That is to say, it is horrifically bad.

And that’s why it’s so fun to watch.

Bonaduce plays a radio DJ in Deadwood, South Dakota, who wants to put on a music festival. But first, he needs a forest cut down. That’s where Williams comes in, playing the leader of a cult-like group of tree-huggers.

There is more suspense at the Supreme Court this week than in this film. Bigfoot makes an appearance within the first 60 seconds of the movie. Someone must have just towed his car because he is ticked. He picks off the loggers one by one and eats them like a kid eating a gingerbread man.

Williams’ and Bonaduce’s characters hate each other and make many references to a common past which included Bonaduce having carnal relations with Williams’ mother. Bonaduce brings this up repeatedly usually resulting in Williams attacking him.

When it’s finally revealed that Bigfoot is on the loose Bonaduce’s character wants to go all Hunger Games on him while Williams wants to give him a food coop membership.

Danny Bonaduce cracks up while Puyallup Major Rick Hansen proclaims Wednesday as “Donny Bonaduce Day.” (PHOTO: Craig Sailor)
The movie has plot holes big enough for Bigfoot to slip through, continuity problems so numerous you might as well make it a drinking game (Note Williams’ on-again, off-again gloves in the cave scene) and CGI special effects that look like they were created by a Kindergarten class.

Bonaduce took Williams down in a 2002 boxing match on Fox-TV’s “Celebrity Boxing.” I get the impression that there’s maybe still some bad blood between Bonaduce and Williams. Bonaduce had one of the film’s actresses stand up and asked her what was worse: being killed by Bigfoot or hugging Williams?

Bonaduce chews up the scenery every moment he’s on screen. The man deserves an Oscar just for keeping a straight face.

Not to be outdone is rocker Alice Cooper who tells Bonaduce, “I’ve only known you two minutes and I hate you.” Cooper then gets eaten by Bigfoot.

Williams also manages to keep a straight face even when another character says to him, “Some people are calling you the Jane Goodall of BigFoot.”

After a climatic scene involving Mount Rushmore (let’s just say there’s now room for another president up there) the movie concluded with one of the funniest closing scenes in Sci-fi history.

“I would like to thank you for sharing 93 minutes of your life you’ll never get back,” Bonaduce told the crowd at the Liberty Theater after the movie was over.