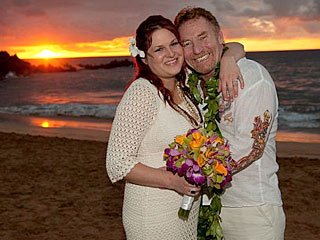 Would you want to marry a celebrity? My friends and I have chatted about this subject from time to time, usually when a celeb is in the news and their personal life is displayed all over Twitter and the blogosphere. Generally speaking, being in a celebrity’s inner circle sounds good until all that attention hits.

When I asked readers if they would date a celebrity, the responses ranged from “sure!” to not in a million years. I think it takes a lot for someone to look beyond that famous persona to get to know someone on a real, genuine, basis. Not surprisingly, when celebrities meet someone who loves them for who they really are (as opposed to their fame or money), many have not been shy about marrying them.

Here are a few midlife celebs that married fans.

Danny Bonaduce, 53, married a fan of his reality show, Breaking Bonaduce. He met Amy Railsback at a coffee shop in 2007. She became his manager and then his wife in 2010.

The kicker here is that the show was largely about the marital problems he had with wife Gretchen Hillmer. He and Hillmer later divorced after the show ended.

I actually think it was a good sign that Railsback saw and enjoyed the show. She was able to view Bonaduce during a difficult time and therefore probably had no false illusions about what she might be in store for if she proceeded with a romantic relationship.

Viewing celebrities as real people is often a problem with fans who fall in love with them, because when the make-believe land of TV is over and they are left with reality, they find that they don’t know the person at all.

I’m always curious at celebs that marry over and over again. What is it they are searching for? I have a soft spot for Kelsey Grammer, 58, whose work I have enjoyed over the years, and who has had an interesting yet tumultuous life.

Grammer’s father was shot to death when he just a boy, his sister was kidnapped and murdered when he was just 20, and when he was 25 he suffered the loss of two half-brothers in a diving accident. (Here’s more about his life and upbringing.)

Perhaps these events have been a part of why he’s married four different times. His current wife, to Kayte Walsh (a former “air hostess” from the UK), came just a couple weeks after his divorce to Camille Grammer, who starred for a time on the Real Housewives of Beverly Hills.

Does it still count as marrying a fan if the fan is a celebrity, too? Katie Holmes swore as a girl that she would marry Tom Cruise. In 2006, she did just that. Except by that time, she was a famous actress herself.

Still, you have to wonder if her being a fan helped or hurt the marriage? Was the childhood fantasy she had of marrying Cruise a hindrance to getting to the “real” place people need to be in order for a marriage to work?

We’ll never know. One thing is for sure, this marriage made created of headlines (with Cruise famously jumping on Oprah Winfrey’s talk show couch in excitement over the love he felt for Holmes), a nickname (TomKat), and a beautiful daughter, Suri.