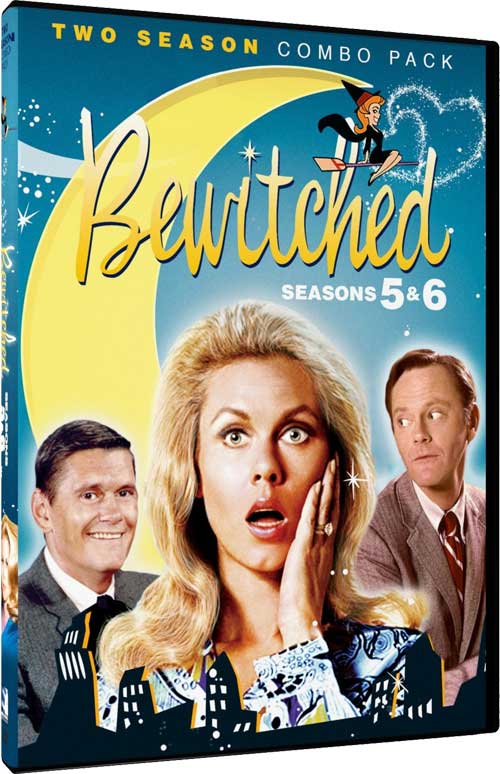 SEASON 6: A new baby… a new maid… and a new husband?! Well, sort of! Elizabeth Montgomery stars in Bewitched: The Complete Sixth Season with Dick Sargent who takes over the role of Darrin, Anges Moorehead and David White. Other new arrivals this season include the birth of the Stephenses’ second child Adam, and the materialization of Esmeralda (played by Alice Ghostley), a shy maid who conjures up accidental witchcraft every time she sneezes. Join the cast as Samantha and Tabitha visit the land of Jack and the Beanstalk, Serena recruits Tommy Boyce & Bobby Hart to sing at her Cosmos Cotillion, Uncle Arthur becomes Superman… and Endora becomes a loving mother-in-law. Darrin, while under Endora’s spell, finds himself speaking in cliches and painting a portrait of his boss’ wife – all with hilarious results! Notable guest stars include Jack Cassidy, Johnny Whitaker (TV’s Family Affair), Bernie Kopell (TV’s The Love Boat), Carol Wayne (TV’s The Tonight Show with Johnny Carson) and Henry Gibson (TV’s Rowan & Martin’s Laugh-In).

On March 17th Mill Creek Entertainment will re-release Bewitched – Seasons 5 & 6 on DVD, with the episodes from this transitory pair of seasons available both together as a “two season combo pack” ($14.98 SRP for 6 discs) and individually (at $9.98 SRP each, with 3 DVDs per title).