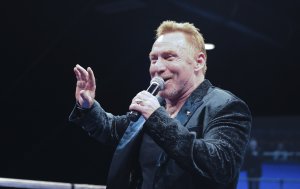 Most people who are looking to pursue a career in comedy of course head to Chicago, New York, or Los Angeles. However, it turns out that there’s quite an impressive list of Philly-bred comedic writers and/or performers:

(Note: for obvious reasons, I didn’t bother to include Will Smith and Bill Cosby)

1. Tina Fey: (yea, I put her first on the list): Although she was born and raised a few miles outside of Philly in Upper Darby, Tina does a killer “Philly accent” and seems to have a lot of hometown pride considering she plays a Philly girl both on 30 Rock and in Baby Mama. I’d go on and list her many achievements as a comedienne but I would probably just end up going on lengthy tangent about how awesome I think she is.

2. Paul F. Tompkins: Most of you probably know him as the host of VH1’s Best Week Ever. He was born in Philly, attended Temple, and started out doing stand-up at The Comedy Works (at my family’s favorite restaurant, Georgine’sin Bristol). Tompkins has also appeared on and wrote for The Daily Show, been featured onComedy Central Presents, had his own segment on the first season of Real Time with Bill Maher, and is a frequent guest on MSNBC’s Countdown with Keith Olberman.

3. Kate Flannery: Although she’s appeared on several TV in shows including Curb Your Enthusiasm, Jimmy Kimmel Live, and The Bernie Mac Show, you probably know her best as “Meredith,” the alcoholic divorcee and mother/one of the funniest cast members of The Office. She attended high school in Radnor PA and graduated from the University of the Arts. Her family also happens to own the bar T.A Flannery’s downtown.

4. Bradley Cooper: Just this year alone, Bradley has starred in He’s Just Not That Into You, hosted SNL, stars in this week’s sure to be #1 movie, The Hangover and has three more films on the way. Although, you probably know him best as the douche-bag boyfriend in Wedding Crashers. He grew up in Jenkintown and graduated from Germantown Academy. In a recent interview with the Inquirer, he talks about how his friends make fun of his Philly accent (read the interview HERE).

5. Teller: Yes, as in the (usually) silent half of the comedy magic duo Penn & Teller and co-host of their Showtime series, Bullshit! (he legally changed his name to just “Teller”). He attended Central High School and actually taught Latin at a high school in Trenton (oddly enough, the same high school that Jon Stewart attended). The two have written three books together and continue to perform their show in Vegas.

6. Larry Fine & Curly Joe DeRita: That’s right, two of the three members of the slap-stick comedy trio the Three Stooges were born and raised in Philly (Moe was from Brooklyn). DeRita actually replaced the original Curly that you’re probably most familiar with in 1958 (random fact: there were actually 8 different Stooges between 1922 and 1975, kind of like Destiny’s Child). Larry was born at 3rd and South which is now memorialized by Jon’s Bar & Grill (which not only has good drinks and food but also sells Larry merchandise).

7. Adam McKay: He grew up in Malvern PA and attended both Penn State and Temple. To sum up McKay’s career: he’s an alumni of the famous Second City Improv Company, one of the founding members of the Upright Citizens Brigade comedy troupe, was a writer for Saturday Night Live and the head writer for three (he actually hired Tina Fey to succeed him). After leaving SNL in 2001, he teamed up with pal Will Ferrell to write Anchorman, Talladega Nights, and Step Brothers (all of which he also directed and produced). Oh, and you probably know his daughter Pearl who appeared with Will in those hilarious short films “Landlord” and “Good Cop, Baby Cop.”

8. Rob McElhenney: He is perhaps the most noteworthy person on this list considering he’s the only one who has created a hilarious hit show about the City of Brotherly Love. That show is of course It’s Always Sunny in Philadelphia which he also produces, writes, and stars in. Rob grew up in South Philly (where the show is mainly set) but moved to Delaware County after high school. He went to St. Joe’s Prep and also attended Temple for a semester. Keep on the lookout for Rob and the rest of the gang as they’ll be in town the next few weeks filming the fifth season of the show.

9. Seth Green: Born in the Overbrook section of West Philly (where he actually attended the same middle school as rapper Eve), Seth has been acting since he was eight. I’m not sure exactly when it was that he became legitimately funny but I suppose it started with his role as Scott Evil in the Austin Powers films (he was also pretty funny in Can’t Hardly Wait). Today he’s still lending his voice to Chris Griffin on Family Guy and writing/directing/producing his own hit Adult Swim show, Robot Chicken.

10. Danny Bonaduce: Born in Brumall PA, Danny currently has his own weekday morning radio show on WYSP and shares a home with his 26 year old fiance in both Hollywood and Philly. I’m not sure his downward spiral as a child star days is as funny as it is tragic but I can say that his VH1 reality show, Breaking Bonaduce was hilarious.

11. Adam Carolla: Adam was born in Philly but grew up in California. He was the co-host of the radio show Loveline from 1995-2005 and its show on MTV from 1996-2000, the co-creator and co-star of The Man Show from 1999-2004; co-creator and performer on Crank Yankers from 2002-2007 and finally, he’s the voice of “Death” on Family Guy. CBS has also picked up his comedy pilot Ace in the Hole which he wrote and will star in alongside Pamela Adlon (who will play his wife).

12. Kevin Hart: Chances are you recognize his face but can’t figure out what you’ve seen him in. He’s had small roles on numerous TV shows and in several movies including 40 Year Old Virgin, Scary Movie 3 and 4, Along Came Polly, Soul Plane, Drillbit Taylor, ect. He also won a Platinum Mic Viewers Choice Award at the BET Comedy Awards in 2005.

13.Bob Saget: He was born in Philly, graduated from Abington Senior High School and is actually the 4th person on this list to have attended Temple University (take that Penn!). While he may have made the bulk of his fortune as Danny Tanner on Full House and the host of America’s Funniest Home Videos, those were obviously not the highlights of his comedic career. Honestly, I didn’t even realize he was actually funny until I saw his surprisingly raunchy 2007 stand-up, Bob Saget: That Ain’t Right and Comedy Central Roast. He currently stars in the ABC sitcom, Surviving Suburbia.

14. Jamie Kennedy: An Upper Darby native, Jamie was recently in town shooting “Cafe,” an indie film in which he plays a Penn dropout-turned-drug dealer with his real-life girlfriend, Jennifer Love Hewitt. Honestly, I debated whether to include him in this list since I didn’t realize he was even considered a “comedian” (you couldn’t pay me to watch Malibu’s Most Wanted or The Jamie Kennedy Experiment). But I guess he was good in his brief appearance in Jay and Silent Bob Strike Back.