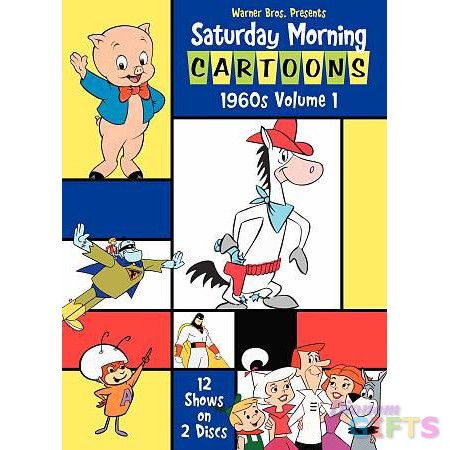 This is the second review of the new Saturday Morning Cartoon collections just released from Warner Bros. This two disc set covers many of the great cartoons of the 1970s. Saturday morning cartoons truly began to grow up in this decade and the shows were very different than those of the 1960s. First off, while most of the 60s shows would run three or four toons during the hour, in the 70s many shows ran just one episode for the entire 30 minute slot. This was confirmation that kids were becoming more sophisticated. They wanted meatier plots and fewer funny animals. The 70s toons were incredibly diversified…there was action, sci-fi, fantasy, horror, musical, mystery, and super hero toons, everything under the sun, frankly.

One toon dominated the decade and became a tremendous incluence and that was “Scooby Doo, Where are You?” Actually debuting in 1969 the adventures of Scooby and the gang were on throughout the 1970s in various incarnations. The tremendous popularity of the Scooby Gang would spawn numerous mystery solving copycat cartoons, largely produced by the Hanna-Barbera studio who created Scooby in the first place.

Goober and the Ghost Chasers was perhaps the most blatant Scooby rip-off. A group of teens and their dog Goober travel about solving ghostly mysteries. Goober, the weird hound dog had the ability to turn invisible when he became frightened. The very first episode “Assignment: The Ahab Apparition” is included and guest stars the Partridge Family with the real voices of Danny Bonaduce and Susan Dey.

Master Asian detective Charlie Chan came to animation in the form of The Amazing Chan and the Chan Clan. The series focused on Chan’s many children who solved crimes and also had their own rock band…a common plot device in 60s and 70s cartoons. Charlie Chan was voiced by Key Luke who played Chan’s son in some of the old movies of the 1940s and also starred in the TV series “Kung Fu” as Master Po. Here’s a bit of trivia…several of the episodes were written by Jamie Farr of M.A.S.H. fame and the Fonz himself, Henry Winkler.

Another Scooby Clone, The Funky Phantom, featured a group of mystery-solving teens who were aided by A Revolutionary War spirit and his cat “Boo”. The ghost was voiced by Daws Butler, one of the greatest voice actors ever. Butler was also the voice of Yogi Bear, Quickdraw McGraw, and Huckleberry Hound. One of the teens was voiced by Monkees drummer Mickey Dolenz.

The Scooby Cartoon featured here is from “The New Scooby New Movies” which had a different guest star each week. This one featured the Harlem Globetrotters in “The Ghostly Creep from the Deep”.

BUT…the disc isn’t all mystery solving…The Batman/Tarzan hour gives us “The Pest” as Batman and Robin track down the Joker. Adam West and Burt Ward reprised their roles from the 1960s live action Batman TV show. And of course there is the “number one super-guy” Hong Kong Phooey also battling crime in “Car Thieves” and “Zoo Story”. Other toons star Speed Buggy, Josie and the Pussy Cats, Wheelie and the Chopper Bunch, and Roman Holidays.

This set is not nearly as diversified as the 1960s set. There’s too much of the mystery shows and not enough of the Sci-Fi/Adventure/Fantasy shows included. Where is Sealab 2020 or the Godzilla Power Hour? Where is the Robonic Stooges and Addams Family? These were all Hanna-Barbera shows. Hopefully these will show up in future sets. Like the 1960s set, the quality is overall quite good. This one loses just a few points for giving us a bit too much of the Scooby clone shows.