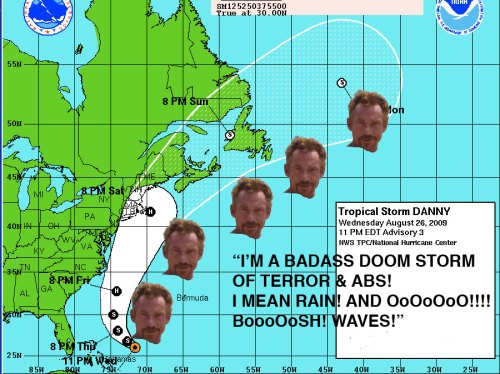 Every year this contest grows and adds all sorts of sideshow acts. It’s been around since 1963, so if you add sandcastle building or 5K runs each year, it all adds up. And yes, there will be over 100 pro competitors and 300 ams (not including the sand sculptors and joggers) but this year there is a very special guest.

And his name is Danny. The Vans and ECSC crew are doing some blogging on the event and have already dubbed the system Danny Bonaduce !

Virginia Beach isn’t known for its consistency and neither is the month of August, unless of course, you throw some tropical juice into the blender with those swimsuit comps, skate ramps, and the Beach Bum Classic.

Tropical Storm Danny is about 500 miles off the coast even with the Florida/Georgia border today. And while he’s pretty disorganized, there’s no lack of wind or swell. Virginia Beach’s swell is on the rise today, with the occasional four-footer. Should see the size come up more with the incoming this afternoon. Winds are east, and will pick up a bit.

The Vans and ECSC crew are doing some blogging on the event and have already dubbed the system Danny Bonaduce, with a great storm graphic here. The event is slated to go off as planned come hell or high water — and there’s a good chance of both.

“The show is on,” said George Alcaraz, general manager of ECSC, “Naturally, we’ll be in constant communications with the proper authorities and public safety officials during the next 48 hours.”

Last year, Asher “The Slasher” Nolan edged out Ryan Helm to win the pro division. This year will be interesting as reports are calling for overhead conditions. A lot of that could be onshore chop. When Danny passes it could look like a different contest all together.

This year, the ECSC is also part of the Western Atlantic Pro Surf Series, which is a team event. While the members of the team surf each event — the ECSC, Fosters Belmar Pro, and Jupiter Fall Classic — individually, the team totals will rank at the end of the season. Winning team gets $5,000 plus paid trips to the Caribbean to film for an upcoming movie.

Things kicked of in Vah Beach yesterday. To get the full list of events (which slightly longer than the history of mankind) go here. Curren strums his guitar today at 6:30.