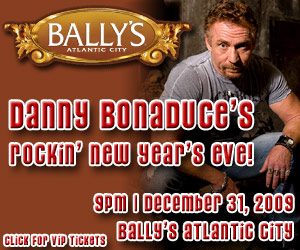 Bally’s in ringing in the New Year… Bonaduce style! Danny Bonaduce’s Rockin’ New Year’s Eve will kick off at 9PM on December 31st and the party will be Rockin’ well past the ball drops!

FOSTERCHILD, who spent last year on tour with Tantric, is back home in Philadelphia working on their new album, which is slated for a mid- 2010 release. The band is also currently wrapping up production on their fist video for “After The Fire,” which was produced by Jackass/Viva La Bam producer Chris Raab.

Prior to their tour with Tantric, FOSTERCHILD was busy performing with such notable artists as Black Label Society, Theory of a Deadman, Buckcherry and more. The group was also voted “Best New Band of 2008” by several top rock critics.

The NYE Party is not FOSTERCHILD’s first time working with the Bonaduce. The group also recently headlined his Birthday Bash in Atlantic City, an event that drew nearly 1,500 fans to Atlantic City making it one of the biggest parties of the summer.

The “Danny Bonaduce Rocking New Year’s Eve Party” kicks off at 9 PM and tickets are $20.00.