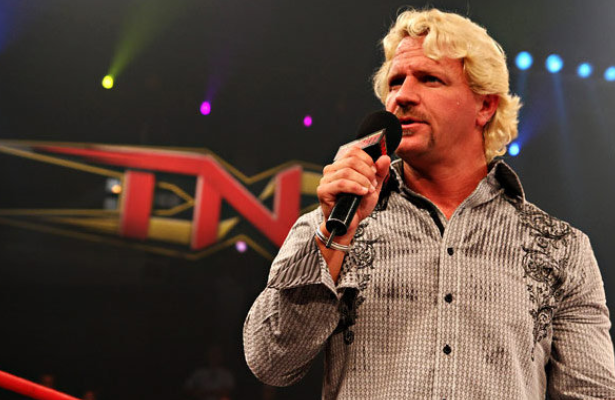 411mania.com
As of now there are no firm plans to do Jeff Jarrett vs Danny Bonaduce, either at Lockdown or anywhere else. They decided to do the angle themselves that morning so that they can come back to it down the road if they want to. The radio interview was one of a series of media shots that Jarrett and Jeremy Borash did in the Northeast recently.

Danny Bonaduce mentioned today during his show that he will need three months to get ready for a match against Jeff Jarrett. That would put it on the Lockdown PPV in April.

thewrestlingdaily.com
TNA founder Jeff Jarrett appeared on Danny Bonaduce’s Philadelphia-based radio show (though this particular broadcast was in New York City) yesterday. Bonaduce, who rose to stardom on The Partridge Family, and found renewed stardom in various reality shows, was also a contestant on Hulk Hogan’s Celebrity Championship Wrestling show in 2008. He would go on to face Eric Young in a six-sides-of-steel match. The latter turned into a heated topic between Bonaduce and Jarrett.

Jarrett praised Bonaduce for having the guts to step into the ring with Young, and subsequently getting speared by Rhino. But when Bonaduce said he owed it all to Hogan’s training, things got interesting. Bonaduce said CCW was “awesome.”

“Tell me one thing that was awesome about CCW,” Jarrett said. “Honestly we’re here to talk about TNA, you’re bringing up a reality show that failed miserably…Let’s stay positive here.”

When Bonaduce mentioned his coaches were Brutus “The Barber” Beefcake and Brian Knobbs, Jarrett replied: “Combined, what in the hell do you think they could teach you, let alone anybody? Are you kidding me, Danny?”

In the studio was a poster of Bonaduce from the series, on which Jarrett wrote “CCW sucks hard.”

In the studio was a championship belt Bonaduce obtained from the series, which he called a “prized possession.” Bonaduce said he wanted to be a part of TNA, and challenged Jarrett to take his belt, and in three months he’d take it back inside a cage.

Jarrett said Bonaduce had an open invitation to come to Genesis, but that he likely wouldn’t do it because “you’re real tough when you’re behind a microphone in NYC.”

Jarrett left the studio with Bonaduce’s CCW championship belt. The entire confrontation can be seen here.