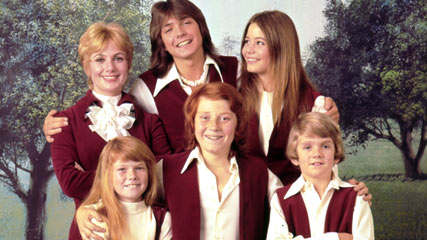 Chris Epting – AOL News
(Sept. 24) — It was 40 years ago today, Shirley Partridge taught the band to play. OK, so maybe it was Keith.

Either way, “The Partridge Family,” a landmark show about a fictional singing group that produced a very real teen idol who, in turn, helped sell the records the group performed on the show, is 40 years old. It premiered back on Sept. 25, 1970, quickly turning David Cassidy, now 60, into a teenybopper sensation.

“The Partridge Family” was a 1970s TV sensation, turning Friday night on ABC into a must-see event.

Today, the concept of singing stars living outside their TV shows as separate characters (see Miley Cyrus and the Jonas Brothers) seems obvious. But in 1970 it was still an extremely creative way to market music to the younger set.

A few years earlier, “The Monkees” had created a template for the formula, but “The Partridge Family” took it to all new heights.

Inspired by the real-life singing family group The Cowsills, producers originally thought about using the Cowsill kids in the show but opted for actors instead. And so, on Sept. 25, 1970, the world was formally introduced to Cassidy (Keith), Susan Dey (Laurie), Danny Bonaduce (Danny), Suzanne Crough (Tracy) and Jeremy Gelbwaks (Chris).

(After the first season, Gelbwaks, whose family moved away from California, would be replaced by Brian Forster.)

Shirley Jones, who played the mother of the five musically talented children and nervously drove the psychedelic bus, of course, was already a star on Broadway and in film. Dave Madden, who played the band’s hapless manager, Reuben Kincaid, had recently been starring on the comedy TV show “Laugh-In.”

First, the concept of a single mom raising a litter of kids was still a relatively new idea for television.

Then, there was the novel premise of a mom raising kids on the road, as a touring band, aboard that iconic, Mondrian-inspired school bus.

And of course, unlike other shows on TV at that point, “The Partridge Family” was a built-in hit machine fueled by the good looks and bubble gum charm of Cassidy.

The “group’s” first No. 1 hit single, “I Think I Love You,” was released to coincide with the debut of the show. Only Cassidy and Jones sang on the song and were backed by several famed studio musicians including Hal Blaine and Louis Shelton.

Throughout the show’s four-year run, many songs from the series owned the charts, and with good reason: The producers hired top-shelf songwriters, including Rupert Holmes (“Echo Valley 26809”), Wes Farrell and Gerry Goffin (“I’ll Meet You Halfway”) and Tony Romeo (“I Think I Love You,” “It’s One of Those Nights”).

Then there were Tommy Boyce and Bobby Hart, Carole King, Barry Mann and Cynthia Well — the list of pedigreed songwriters who added to the show goes on.

Today, the entire cast is still alive and well and, with the exception of Dey, had no problem taking the time to speak with AOL News about their memories of the show.

Dey, as has been widely covered, has never taken part in any “Partridge Family” extracurricular activities like talk-show panel reunions or autograph shows. Historically, she has refused to talk about the show, and since starring in “L.A. Law” for six years (ending in 1992), she has maintained a low-profile, if not invisible, existence.

“I don’t get it,” Bonaduce, today a popular morning man on WYSP radio in Philadelphia, told AOL News. “She had the best post-Partridge acting career of us all. It isn’t like it hurt her or anything. Come on, Susan!”

Bonaduce, whose high-profile run-ins with the law, reality TV show and various celebrity boxing events kept him firmly in the public eye over the years, relishes his history as bassist Danny Partridge.

“I owe my life to that show,” he said. “It wasn’t like I was much of an actor. I was just sort of playing myself, a precocious, wisecracking kid. So I’m glad people still remember it fondly. And I got to hang out with David Cassidy!”

The self-effacing Bonaduce will reunite with his TV older brother on Oct. 23, playing bass for one song during one of Cassidy’s Philadelphia-area concerts. (Cassidy issued the challenge recently while appearing on Bonaduce’s radio show.)

Today, Cassidy, whose poster image was pinned up in thousands of teenage girls’ bedrooms in the 1970s, tours in concert in America and worldwide — and will return as a guest on Oprah’s last season, taping Oct. 22.

He told AOL News that he never imagined the show would have the impact it continues to have. “When you’re 19 years old and you’re making a living as an actor and musician, you can’t imagine the kind of success internationally, universally that we received.

“There was no video, there were no CD’s or DVD’s, so people sat in their living rooms watching the show every Friday night — as a family — and there was a much more immediate response. It catapulted me to having the largest fan club at that time in history, and the merchandising, which still continues, was unprecedented both financially and in terms of volume.”

Cassidy also learned a hard lesson in how teen idols were bought, sold and traded back then.

“Although I was young at the time, I recognized how we made a mark on the entertainment and licensing industries. Actors, however, were not being compensated for any ancillary income, and we were being paid very little at the time.

With hits like “I Think I Love You” and “Point Me in the Direction of Albuquerque” the Partridge Family sung their way into American hearts. From left: Susan Dey, Suzanne Crough, Brian Forster, David Cassidy, Danny Bonaduce, Shirley Jones, Dave Madden.
“Because I was a minor legally when I first signed the contract, my manager and I were able to re-negotiate and, in doing so, I was able to set a precedent by being the first person to contractually receive royalties on merchandising and net profit sharing, which laid the foundation for everyone since.

“Of course, most of us share the same problem trying to collect the money due us. It’s fascinating because I’ve just done an audit of Sony Entertainment for the last three years only and it showed I am owed millions of dollars for television and merchandising alone. Imagine what I’m due for the last 30 years! Now the fight begins to try to collect it.”

The younger Partridges, Chris and Tracy, who rarely spoke on the show, are downright chatty about it 40 years later.

Gelbwaks, the original Chris Partridge, today is a management consultant in New Jersey. “The show was incrementally groundbreaking,” he told AOL News. “To have that sort of rock and roll lifestyle, tame as it was, was a big idea. My best memories are working with some of the legendary actors they brought in, like Ray Bolger, who played the Scarecrow in ‘The Wizard of Oz.’ And of course, the drum lessons to make me look like I knew what I was doing were fun.”

Gelbwaks remembers leaving the show after the first season, but when he entered his new school, the show was just going on the air, making him an instant pint-sized celebrity among his new classmates.

Forster, who replaced Gelbwaks as Chris for the final three seasons, also remembers the musical lessons. “Anything they could do to make us seem sort of authentic,” he said with a laugh. Today, the racing car enthusiast and entrepreneur (and great-great-great-grandson of author Charles Dickens) says he hasn’t seen the show for years but still enjoys taking part in the occasional get-together.

As does Crough, the triangle- and tambourine-playing youngest daughter, Tracy. Today, she lives outside Las Vegas with her family and stays in touch with several cast members. “It’s easy today with e-mail, and that’s a fun era to talk about. Mostly I remember Fridays because it was ‘music day’ when we’d tape the song of the week. That meant the heavy velvet costumes and more ‘percussion’ lessons for me.”

Shirley Jones, who still performs, told AOL News she thinks the show will be best remembered “For presenting American TV with one of its first ‘working mothers’ and for producing a few teen idols. I think the pilot still stands out as the best episode of all and overall, I have nothing but warm memories of doing the show.”

The affable Madden, who portrayed the band’s manager, thinks the show did itself a disservice after the first season.

“Here you had this great concept,” he told AOL News. “A family that traveled, performed, did exciting things — and it was a hit! So what happens? Network execs get scared by success. Season two, they say the family has to stay home more. The kids have to go to school. It became more like a traditional sitcom. They started over-thinking it and took away the things that made it special. They made it too squeaky clean. One episode I said, ‘Gee Danny, that’s rotten.’ Then they decided ‘rotten’ was too strong a word so they changed it to ‘awful.’ Think times have changed today?”

Madden also remembers being incredulous when the show was moved from Friday to Saturday night. “They had this great thing going. ‘The Brady Bunch,’ ‘The Partridge Family,’ ‘The Odd Couple.’ They owned the night. Then they moved us against ‘All in the Family’ on Saturdays, which killed us.”

By the fourth season, in the face of shrinking ratings, the producers pulled out some typical stops, like bringing in a new cute kid named Ricky Segall (‘The Brady Bunch’ tried a similar move with Cousin Oliver) but to no avail.

All of the cast members interviewed told AOL News that they’d be up for an episodic TV reunion should the opportunity arise, with a few caveats.

Cassidy said, “I would love to do something satirical that could be self-deprecating and humorous at the same time, but given the time in which we shot the show, and the climate of the world today, it would be hard to imagine replicating what we did then.”

Madden thinks it would be “preposterous” and “impossible” but, if it happened, he’d entertain the idea. All that would leave is Dey.

Madden says he’s in almost daily contact with the reclusive actress, either by phone or e-mail (though out of respect for their friendship, he’ll reveal no details except to say she’s on the coast living with her family). So, to any enterprising producers reading this, should you want to try to make a “Partridge Family” reunion happen, take note that you’ll obviously need to go through their longtime manager, Reuben Kincaid.