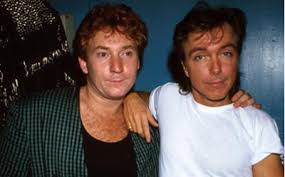 Check out this footage from the performance at the Keswick theater. Click on the screen.. 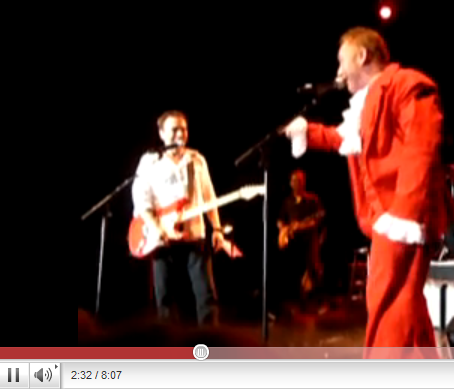 Bonaduce still in awe of his older ‘Partridge’ brother

He’s been in show business for more than 40 years and has interviewed notable personalities on his various radio programs for more than 20, but Danny Bonaduce admits there’s one celebrity with whom he still gets starstruck.

“You know how if you knew a guy in high school and he was really fat, and he loses a lot of weight, he’s still a fat guy to you, because that’s how you know him?” Bonaduce said during a telephone interview Oct. 15, shortly after wrapping the Friday edition of his popular 94.1 FM WYSP morning program.

“He makes me a little bit nervous, to be honest with you. Especially on the radio, I want to impress him. I was more nervous in the studio with him than I was with Tom Hanks. I still see David as the biggest star in the world.”

Bonaduce, who’s as engaging and talkative on the phone as he is on the air, spoke candidly and honestly about his past, the battles he’s overcome and his hometown of Philadelphia, offering up numerous comical and self-deprecating anecdotes about his life and experiences.

He describes his relationship with Cassidy as a “loyal friendship,” and points to how Cassidy once risked his good name to help his television brother.

“A little over 20 years ago, I got into a little bit of trouble,” Bonaduce said of one of his brushes with the law. “I couldn’t get a job and David Cassidy said, ‘I always said you’re the funniest guy I know. I will let you be my opening act and give you a job. You just have to show up and be good.’

“David had to pretty much get up in front of a judge or parole officer and he had to swear to be responsible for me. Because I wasn’t allowed to cross state lines. I’d go onstage, do my set and introduce him and he’d do his music show. And he’s really serious about it and really good.

“But I’d run off the stage and into the nearest cab and try and be home before I figured David’s show was over and see what kind of trouble I could get into before he got back and did bedcheck. I’m almost 30 years old at this point and I’ve still got Keith [Partridge] checking in on me making sure I’m in bed on time.

“But David didn’t need to go out of his way. And he put a lot on the line. I could have been a train wreck, and I was attached to David Cassidy. So no matter how much time goes by, there’s that loyalty from people like David.”

And that’s why Cassidy contacted Bonaduce to be his opening act at an Oct. 23 performance at the Keswick Theatre. But Cassidy had greater plans for Bonaduce than an opening act. The wheels were set in motion during an appearance on “The Today Show” to promote the 40th anniversary of “The Partridge Family.” Cassidy agreed to stop by Bonaduce’s radio show the following week.

“And sure enough, the next week, he walks into the studio and I start to get nervous again,” Bonaduce said. “Out of nowhere he goes, really seriously, ‘I want to challenge you, Danny.’ And I’m thinking, ‘I hope it’s not to a fight, I’ll kill you.’ And he goes, ‘I want to challenge you to learn one “Partridge Family” song on the bass guitar and actually join me onstage at the Keswick Theatre and for the first time ever we will be onstage playing music.’

“After the show he asked, ‘So what are you going to do? I said, ‘I’ll learn it. There’s only four strings on the bass. How difficult can it be?’ The answer is — ‘very.’”

So Bonaduce has been practicing his bass guitar in preparation for his one-song duet with Cassidy. While they’re keeping the song under wraps, Bonaduce did admit on his radio program on Monday that the song won’t be “I Think I Love You.”

And while the performance will bring Bonaduce’s career full circle (Danny Partridge played bass in the family band … though he didn’t really play the instrument), he admits he’s not as concerned with his bass playing as he is with trying to craft a comedy routine that will serve as the opening act for the show.

“I’m polishing up my act … and David says to me, ‘I’d like to play some more dates with you in Atlantic City, I’d like you to keep your act a little more family-friendly.’ To which I replied, ‘Well, I’m f—ed,’” Bonaduce said. “If I came out and did my radio show without the censorship of the FCC, it would be pretty hardcore. Half of David’s audience might melt.

“People are there for the ‘Partridge Family’ and the nostalgia, but it’s a pretty distant memory for me. Plus they’re going to want David Cassidy and Danny Bonaduce stories. People always asked me my whole life, ‘What was it like hanging out with David?’ I was 10, he was an adult. I never hung out with him till I was an adult. So I’m trying to write a comedy act with some ‘Partridge Family’ stories. I may have to call my mother to remind me. But I’m much more nervous about that than the bass playing.”

Still, Bonaduce is taking his part in Cassidy’s musical show seriously. He’s not planning on going onstage to embarrass himself or Cassidy.

He is, however, intent on helping make history.

“The people can expect one thing for sure,” he said. “If they bring their cameras, they will get a picture of one thing that has never been seen before or will ever be seen again, and that will be me standing on a stage next to David Cassidy with a musical instrument that’s actually plugged in.”

In addition to speaking of the impending onstage reunion, Bonaduce spoke on numerous other topics.

On his career memorabilia: “Some TV show from Britain came over the other day. They were doing a documentary on fame, and they wanted to know where my ‘Partridge Family’ memorabilia was. I said I don’t have any. Why would I need a ‘Partridge Family’ lunchbox? I don’t carry my lunch to work. What I do have, one of my prized possessions, my girlfriend got me a Danny Partridge trading card, and another trading card of mine from 40 years later when I was in TNA [wrestling promotion Total Nonstop Action]. Now that is a career. It’s not an Academy Award, but just the fact that you made a trading card once is a big deal. That you did it again in totally another profession — those are the only pictures of me performing that are in my house. I was really proud of that. You made baseball trading cards twice, with two different occupations, neither of which you’re very good at.”

On returning to Philadelphia: “Coming back home, show business-wise, has completely outdone Hollywood. The coolest things that have ever happened to me in show business have happened in Philly.”

On bouncing back: “The bad things didn’t happen to me … I did them, and the ramifications were difficult. Nobody forced anything down my throat or up my nose. I did them. So I thought, let’s not try to lie about this, just admit it and try to get better. Anything there is to bounce back from, I can do it, because most people don’t know how far you can fall until you have to bounce back. I’ve been down as far as you can go, and I had the best bounce back ever, because I bounced back home. I like the life I have very much. I like my job, I like my girlfriend, I love my house.”

On his radio show and his future: “There’s a ton more to conquer, but unless you’re Ryan Seacrest, you never quit radio for TV. After ‘Partridge Family,’ I didn’t work again for 14 years until I got into radio. Radio is the pinnacle of my career. I do more TV appearances now than I did in L.A. I can go down to 17th Street and do CNN, Fox News … I do the reality show ‘World’s Dumbest,’ I take the train into New York and do a monthload of episodes in a day. I was just in New York pitching a couple shows there. But these are the things that have to wrap around the radio show. Nothing can make my bosses fear, ‘He’s leaving us for TV.’ If you put all my TV successes together, I could not have lived on it up to this moment. I haven’t been that successful. The radio is the base.”