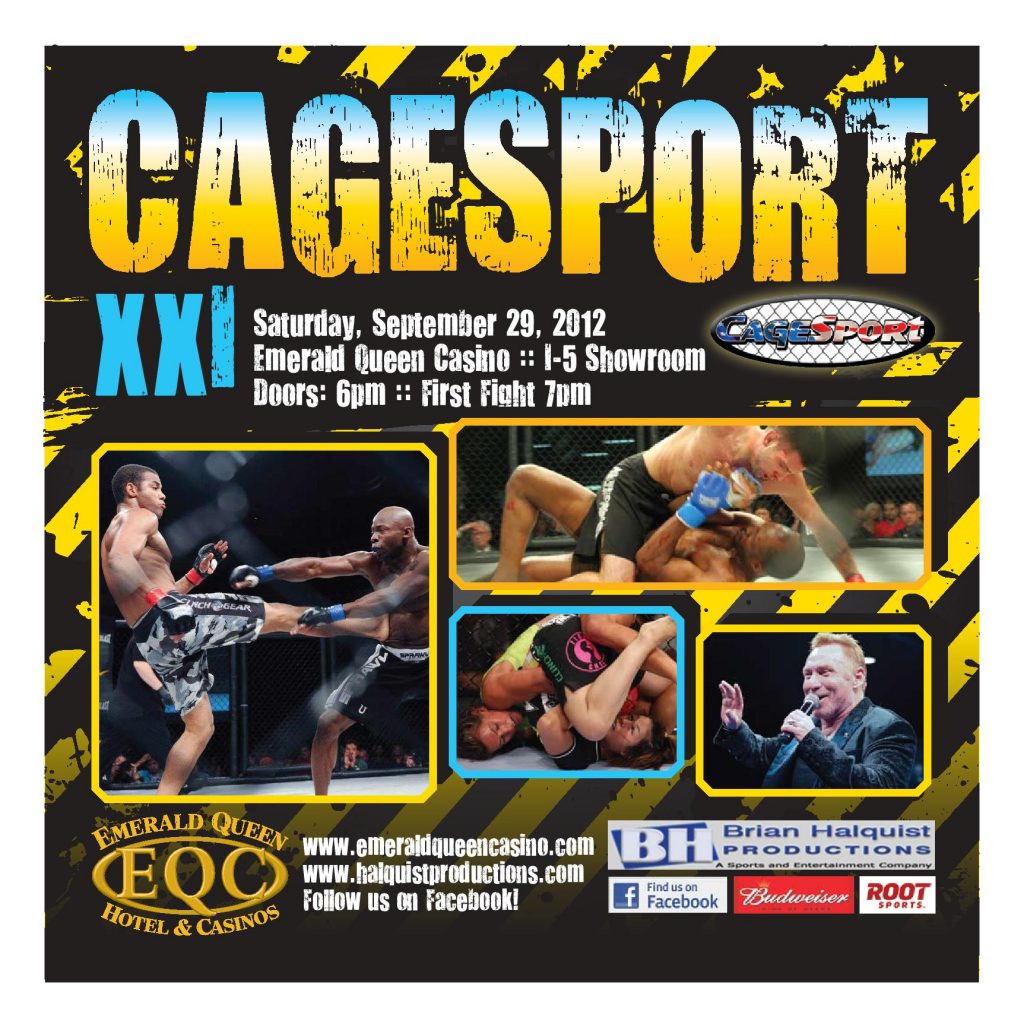 Lightweight Brandon Dudley of North Bend, WA risks his perfect 4-0 record against Springfield, OR resident Emmanuel Sanchez in a three round contest.

Unbeaten in both the pros and as an amateur, Dudley’s forced most of his foes to tap out in the opening round. He’s yet to find himself in any serious danger since entering the octagon and is creating a major buzz amongst MMA fans, who’ve expressed their eagerness to see him fight again.

A winner in his last two bouts, most recently scoring a second round submission over Travis Jackson, Sanchez believes that he’ll be the one to end the hype behind his highly-touted opponent.

The fighting pride of Burien, WA, Knopp’s built a reputation as one of the most explosive strikers in the sport. On July 14, Knopp stopped Darrio Mobley on the “CageSport XX” card.

A natural light heavyweight, Pitts is moving down a division for the biggest challenge of his career. Fresh off a first round TKO on August 4, Pitts plans to use his size and momentum to bring home a victory to Portland, OR. Pitt is trained by 2000 Olympic Greco-Roman Wrestling Silver Medalist Matt Linland out of the world famous Team Quest Gym. The gym was started by Linland along with UFC legends Randy Couture and Dan Henderson.

In featured undercard bouts, rising star and Yakima, WA native Julian Erosa risks his unbeaten record against Bend, OR based chokehold master Jason Gybles. Erosa, who forced most of his opponents to tapout, faces the fellow submission artist in a three round lightweight contest.

At 3-0, Boysen most recently stopped Rob Dyer in the opening round. The Seattle, WA sensation has looked fantastic thus far but is taking a major step up in competition.

Mulvihill, of Spokane, WA fought on six “CageSport” cards, providing the fans with quality bouts each time out. Earlier this year, he took the aforementioned Erosa four rounds before losing by submission. A winner in four of his last six, Mulvihill is faced with yet another tough opponent on the 29th.

“This is going to be a night everybody involved will remember,” said promoter Brian Halquist. “The CageSport brand has grown so much over the years and with the ROOT SPORTS broadcast, things will go to a whole new level. I’m beyond excited for everything that will unfold come September 29!”

Tickets are available to the ten bout fight card on ticketmaster.com or by going to the Emerald Queen box office. For more information and the latest updates, go to Halquistproductions.com or http://www.facebook.com/pages/CageSport-MMA/188915101800