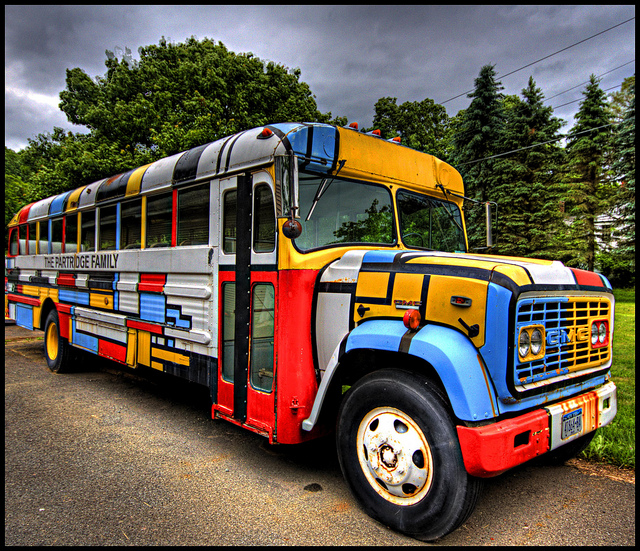 September 25th 1970 the ABC network introduced us to a little show about a musical family simply known to their friends “The Partridges“.

The 70′s had a lot of musical TV families; from the Brady Bunch to the Monkees. The networks discovered that by doing this they could break into a whole other industry, Music. The promotional tie-ins would go beyond anything they had ever done before, because now they could release records.

ABC started casting for The Partridge Family they were looking for someone who would be an experienced singer as well as a motherly figure for the TV family. Their sights set on veteran actress Shirley Jones. Shirley was big in the 50′s and throughout the early sixties for her musicals. She had leading roles in both The Music Man and Oklahoma!. She was married to singer Jack Cassidy and she had three sons, two of which were musically inclined; David and Shawn. The networks saw gold.

Shawn Cassidy was already cast in the “The Hardy Boys“, so they screened David Cassidy for the role of the eldest son and so mother and son carried the show musically. Susan Dey was given the role as the oldest daughter, and she, too, was musically-inclined. Danny Bonaduce was brought on for the role of the brilliantly funny son, Danny, and the group was rounded out by Jeremy Gelbwaks (Chris) and Suzanne Crough as the youngest, Tracy.

The pilot saw the kids trying to start a garage band and they convince their widowed bank teller mother, Shirley Partridge, to help them out by singing as they record a pop song in their garage. Through the efforts of precocious ten-year-old Danny, they find a manager, Reuben Kincaid, who helps make the song a Top 40 hit.

After some more persuading, Shirley agrees that the family can go on tour. They acquire an old school bus for touring, paint it with Mondrian-inspired patterns, and depart to Las Vegas, Nevada for their first live gig at Caesars Palace.

Subsequent episodes usually feature the band performing in various venues or in their garage. The shows often contrast suburban life with the adventures of a show business family on the road. After the first season, more of the show’s action takes place in their home town rather than on tour.

The show lasted four seasons. It also had no less than 20 #1 hits on Billboards top 10.

In 2004 VH1 tried to bring the series back. They held an audition and turned it into a reality show called “In Search of the Partridge Family”. A pilot was made and aired on VH1 4 times, but never quite got picked up. Danny Bonaduce was involved in the production.

Mill Creek Entertainment has revised the series for home viewing. The set doesn’t get released until June 24th, but they were nice enough to give us an advanced peek. As with all of their releases, quality transfers are top the list. The release is a whopping 1,235 minutes long and consists of 4 DVDs in the set. Two for each season. The aspect ratio is 1.33:1 crystal clear picture and sound. The art work is original and collectable. This is a must set for any Partridge fan!

Mill Creek has plans to release Seasons 3 and 4 as well. They also makes owning these gems affordable (LINK). Treat your family to this nostalgic series today, and enjoy reliving the memories and the songs. Thanks to Mill Creek Entertainment, TV series are finally being given a second life. I can’t wait to what’s next!