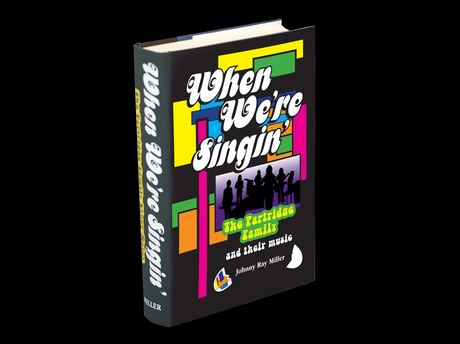 “When We’re Singin’“: The Partridge Family & Their Music” is a whopping 468-page hardcover volume with 64 color pages of rare photos, magazine and album covers and fan-collected memorabilia from the Partridge’s 1970s heyday.

John Miller remembers his discovery of “The Partridge Family” as if it were yesterday.

He was 8 years old when he walked in on his parents watching the ABC-TV series and instantly he became glued to the TV. “When they sang is when it really got me captivated,” Miller said.

A student at Whipple Elementary School, Miller would tape Partridge Family songs from the TV set with his tape recorder, eventually persuading his mother to buy him a Partridge Family album at the Clarkins store on Route 62.

The Partridges, that fictional family band led by David Cassidy, “became a lifelong obsession, and it all started in Canton,” Miller said.

PARTRIDGE FAMILY: DID YOU KNOW?

–In 1971, The Partridge Family had four different albums on the Billboard charts, and sold more than 200,000 records in one day alone.

–Tiger Beat magazine featured David Cassidy on the cover of every issue for more than two years.

–“The Partridge Family” episode guest-starring Richard Pryor and Louis Gossett, Jr. was ranked as one of TV Guide’s greatest television episodes of all time.

What makes Miller’s ongoing adoration of the Partridge Family newsworthy is that he has authored the definitive Partridge Family book. Titled “When We’re Singin’: The Partridge Family & Their Music,’” it is a whopping 468-page hardcover volume with 64 color pages of rare photos, magazine and album covers and fan-collected memorabilia from the Partridge’s 1970s heyday. To compile in-depth stories about the Partridge Family TV series and records, Miller interviewed more than 100 people, including series stars Shirley Jones (at her Southern California home), Danny Bonaduce and Dave Madden, record producer Wes Farrell and rock photographer Henry Diltz. Cassidy contributed a brief foreward.

Since the release of “When We’re Singin’” last December, “the reaction has been phenomenal,” said Miller, who now lives in Negley, Ohio. “I have gotten hundreds of letters thanking me for this book. They say this is the book they’ve been waiting for. People say, ’I can’t believe the quality of this book. The VP of Bell Records (the Partridge’s label) and the designer of their album jackets both started their letters with ‘Wow!’

Brian Forster (who played by drummer Chris Partridge) said, ‘I’m learning things about the show I was in that I never even knew.’”

Most thrilling for Miller was the reaction of Cassidy, his lifelong idol. “He has been so supportive of this book,” Miller said. “I saw him backstage at the Canyon Club (a California concert venue) in February, and he posed for photos and said he loved it.” Cassidy allowed Miller to sell copies of the book in the lobby and he sold out.

Incidentally, Cassidy appeared in concert at Canton Memorial Civic Center in 1971, during his first rush of Partridge fame. Miller owns one of Cassidy’s white jumpsuits from that tour. Now 66, Cassidy has announced that he’ll retire from performing at the end of this year.

Miller said his book, which has been shipped to fans in Brazil, New Zealand, Canada, France and other countries, “is the high point of my life. It’s such a ride. I don’t ever want it to stop.” Copies of the book are available for $29.99 from www.whenweresingin.com.

Asked what has kept him such a diehard Partridge Family fan for all these years, he said, “The music, beyond any shadow of a doubt. I still love the TV show. I think it was groundbreaking for its day. But the music is phenomenal.”

The Partridge Family’s biggest hits, released in 1970 and 1971, were “I Think I Love You,” “Doesn’t Somebody Want to Be Wanted,” “I’ll Meet You Halfway” and “I Woke Up in Love This Morning.” “If you put a Partridge Family CD into your ’70s party mix and don’t tell anybody, people will ask, ‘Who is that?’ I tell them it’s the Partridge Family and they say, ‘You’re kidding!’ If you hear the music with out the marketing image attached to it, it holds up as great music of that era. David Cassidy’s voice was phenomenal.”

It was a close encounter with Cassidy that inspired Miller to write his book. He was working as the general manager of the Barrow-Civic Theatre in Franklin, Pa., in 2009 when he booked a concert there by Cassidy. During the 90-minute limo ride from the hotel to the theater, the men conversed extensively and never once did Miller mention the Partridge Family. “David struck me as such a normal guy at heart,” Miller said. Not surprisingly, Miller set up a deluxe backstage area at the theater for Cassidy and his band, along with a memorabilia exhibit. An appreciative Cassidy asked if Miller had a song request for the sold-out concert. Miller chose Johnny Ray’s “Cry,” which Cassidy had recently recorded, and Cassidy closed the show with it.

Shortly after Cassidy’s show, Miller was forced to leave his job at the theater to take care of his mother, who was suffering from dementia. “I was on such a high from the concert, I started thinking about what I could do next,” he said. Miller noticed that whenever he would visit www.cmongethappy.com, the Partridge Family website, “it seemed as though the conversation on the message boards was always, ‘Why doesn’t someone write a book?’ I was a fan who wanted a book, too.” At the time, the only Partridge Family book was “The Partridge Family Album,” published in 1994, which was basically an episode guide to the TV series. Miller, who had minored in journalism at Kent State University, had found his next project.

Miller knew that interviewing key Partidge Family players would be essential to the book he wanted to write. He spoke with Marty Engels, Shirley Jones’ now-deceased husband, about interviewing her bu no promises were made. Out of the blue one day in July 2010, while standing in a grocery checkout line, Miller’s cellphone rang and it was Shirley Jones. She invited him to interview her at her home in the Hollywood Hills. Several days later, Miller found himself on her doorstep. “I remember knocking and her answering the door. It was like something out of ‘The Partridge Family,’” Miller recalled. “We sat in her living room and talked for two and a half hours.” Jones, who was “very proud of the ‘Partridge Family,’ seemed especially impressed by Miller’s knowledge of the Partridge’s music and her unreleased solo recordings.

Danny Bonaduce, who Miller interviewed via telephone, “is unguarded and absolutely a genuine spirit of life. He makes you feel like you;re one of the gang,” he said. Suzanne Crough, who played Tracey Partridge, “became kind of a friend to me, someone I could talk to on the phone. She was so casual and had a great sense of humor,” he said. Sadly, Crough died of a rare heart condition in 2015 at age 52.

To Miller’s disappointment, he never got to interview Cassidy, the person he was most confident about getting. For five years, he was dodged by Cassidy’s management. “I was dodged. It was very weird,” he said. Just before the book went to press, Cassidy wrote a few sentences for the book’s forward. “Partridge Family” member Susan Dey declined to be interviewed for the book.

A key contact Miller made was Henry Diltz, a prominent rock ‘n’ roll photographer in California who became Cassidy’s personal photographer. Nor only did he give Miller permission to use numerous of his photos in the book, he also contributed signed prints of his photos as incentives for the Kickstart campaign.