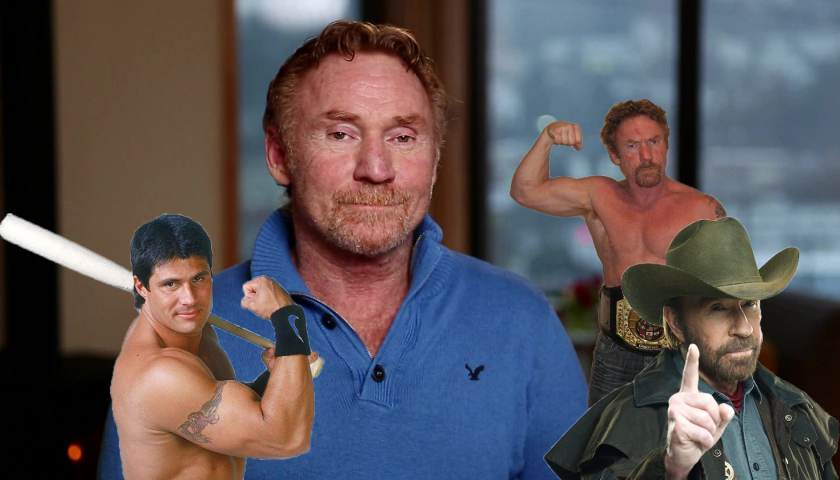 Danny Bonaduce has done it all. The 58-year old star has worked as a radio/television personality, comedian, professional wrestler, and former child actor. While you may remember him from the Patridge Family in the 1970’s, today’s generation may recently recall him more for his time on Breaking Bonaduce or for his role in some of the best celebrity fights ever recorded.  MyMMANews.com’s Tony Reid caught up with the actor to talk about his experience in martial arts.

Tony Reid – You have a rich background in the martial arts, holding a number of black belts (Tae Kwon Do, etc.) and over 20 years experience, do you ever play the “What if” game and wonder how you would have performed in mixed martial arts competition?

Danny Bonaduce – “Did you see me with the pictures with Chuck Norris? Do you have time for me to just babble? I just got off the air and I generally scream for another four hours.”

Danny Bonaduce – “Chuck and I are sitting there in the park and these five maybe six guys, full on gang members roll up, and I’m Danny Partridge and Chuck Norris is nowhere near famous yet, Bruce Lee just died and Chuck had just been in the movie where he pulls out all of his chest hair in the Roman Coliseum and blows it in the air. Nobody knows him yet, so they are trying to get him out there and they are putting him in Tiger Beat Magazine with me. So, we are standing there and he is giving me a Karate lesson, mostly we are just standing there posing. And the Vatos, or whatever gang they were from walked up on us, like Crip walking, I was cool, I was with Chuck Norris but my mom starts to freak out. So they get up closer to us and they say “You think you are pretty bad ass huh, man?” I’m just standing there, Chuck is just standing there and I’m like “Please, Chuck say something. I’m like, ten (years old).” And Chuck is a very quiet guy but the guy gets pretty close to Chuck and Chuck says to all of them “Hey guys, come here , get a little closer’, gather around. Here’s what we are going to do. I’m going to dislocate your right elbow and while you are screaming in pain and your friends start to freak out I’m going to take this other guy’s eye out and then I’m going to knock the other guy out then all your other friends are going to run away and leave you laying here. Ok…go!” and everybody ran. It was the bitchinest thing ever. I thought, man, I want to be you.

“Here’s why the martial arts really work and if you want to say this is racist go ahead. Chinese, Japanese they are almost all the same size. They all can still use those techniques. I have a third degree black belt, I’m 5’6”, you get a guy coming in there meaning business and swinging for death at 6’4”, he’s gonna kill me! All that one shot to the knee stuff everybody talks about, that’s one in a hundred. That’s why it works; they are all approximately the same size and can use the techniques against each other and see who has the better technique.”

Tony Reid – You have had a number of high profile fights against celebrities like The Brady Bunch’s Barry Williams, where you TKO’d him. What are your thoughts on that performance?

Danny Bonaduce – “I hurt that man. I didn’t mean to. I tried not to. I tried to carry him. The audience started to boo and I can’t have that. He was much, much bigger than me and I am bending over to jab him in the stomach. It was stupid. At the same time he tagged me to the body hard enough to see a little white flash but no big deal. At the same time the audience booed I stood straight up and came back like I was throwing a baseball and he had his hands completely spread apart and I hit him in the face so hard I hurt my elbow and my shoulder. And since it wasn’t a sanctioned fight they took him over to the corner and instead of counting to ten they counted to ten minutes! They rolled the cameras again and I knocked him down six times in 91 seconds. I felt terrible. For three years after that fight, everywhere I went, all the shit I’ve done, the drugs and the sex and jail and this and that, all the things I’ve done out the window. All people said to me was ‘Man, you beat the shit out of Barry Williams.’ And all I could think was that poor bastard is walking around and all people are saying to him is ‘Man, did Danny Partridge beat your ass.’”

Tony Reid – You also fought Jose Canseco, who was a foot taller than you and outweighed you by about 100 pounds. What was that experience like for you?

Danny Bonaduce – “I will tell you, I have been in some scary spots, that when he came in, he was wearing a shirt covered in tattoos, I thought he was all tatted up, he was still on ‘roids. He comes into the ring…if I were going to carve the perfect man I would carve Jose Canseco… I’m 5’6”. He’s 6’6”. His shoulders are above my head and wider than my reach and I just thought to myself “Of all the stupid decisions you have ever made this was the stupidest.” This was going to hurt…permanently. At the weigh ins I put my fist next to his body and quickly realized that there was no way I could inflict any pain on this guy. So in training I just hit the bag more and more and more. My plan was to hit him more than he hit me and just make sure I didn’t get knocked out and that’s what happened. I got attacked by a bunch of dogs once. That was probably the other scariest thing that’s happened to me. Oh and I got shot once, too. To be honest with you, her pointing the gun and saying she was going to shoot me and knowing she was going to, that was as scary but when she actually shot me, that wasn’t as scary as when Jose Canseco got in the ring.”

Tony Reid – So after talking about the Celebrity Boxing matches maybe someday we can do a few Celebrity MMA fights.

Danny Bonaduce – “I will tell you this, if Meisha (Tate) teaches me the ground game, I’m not promising I won’t fight at one of these events. It doesn’t even have to be a celebrity. I will fight anybody. I’m undefeated and I want to stay undefeated. I will get in the ring or cage and do a straight up fight with someone I have never met before. I won’t do it until Meisha tells me or Jeff (Osborne) tells me. I’m not an asshole; I don’t want my brains beat in. My problem is, and I’m talking about this realistically because I would love to do it, my game plan would be to knock the guy out on my feet within two minutes. I have bad lungs, man.”

Tony Reid – With your martial arts background and skill set coupled with your notorious bad temper you can be quite a handful. Has there ever been a moment when you really regret losing your temper and making a situation physical?

Danny Bonaduce – “Donny Osmond. My very first fight I almost got my ass handed to me…by Donny Osmond. Walking to the ring I had one girl holding my cigarette, one girl brushing my hair, I was drunk as shit. It was 1994, we get in the ring, they say go and I run over to him and pound on him until he’s, like, dying. The bell is about to ring, I wont let him fall down, I’ve seen in movies where they wont let the fall guy fall down so I hit him with some uppercuts and stand his ass back up. Finally I couldn’t breathe anymore so I stood back and went to let him fall down and he stood straight up and looked at me like he was going to kill me. The bell rang to end the round and I went “Holy Fuck I am about to get my ass kicked by Donny Osmond!” I would have had to move to Thailand if that happened. So by round two I hadn’t recovered so I thought I could at least look tough so I hooked my arms behind the ropes and just let him punch me in the face for two rounds. Real tough but you don’t win fights by getting punched in the face. By round three I still hadn’t recovered and he came running over to finish the fight and I said “Fuck this, it’s gonna hurt” and I stick my arm and turned away and he ran into it. It didn’t hurt him at all but he wiped his nose, he got a bloody nose and it scared him. He ran away and I pretended like I wanted to catch him and I won a 3-2 decision.”

Tony Reid – Are you a fan of MMA, and if so are there certain fighters you enjoy watch fighting more than others?

Danny Bonaduce – “I know a lot of these guys and a lot of them are retired now like Randy Couture. By the way, I have fought a lot of these guys, just playing around, I guess I got out of line because Chuck Liddell knocked me out, Tito Ortiz knocked me out, on the one season of Dancing with the Stars there was a point where there was not one person on the show who had not punched me in the face, Mario Lopez, Chuck Liddell, everyone.”

Tony Reid – You had a gig as a color commentator for MMA promotion CageSport for a short time. How did that opportunity arise?

Danny Bonaduce – “Well Brian Halquist and I are good buddies. I did the ring announcing for an event and I thought he (Halquist) was the coolest guy in the world. I pulled him aside and I said don’t put me in a main event. I don’t have the best lungs and don’t tell my wife, but I want to train for a couple of months and then you can put me on a card. He loved that. So off of that, this opportunity arose. I would like to add that Brian Halquist is a genius for signing me up for this. If I may be so bold and show lack of humility I thought ‘Boy are you making a smart call, this is going to be awesome!’ I’m a huge fan of Jeff (Osborne) and even if I wasn’t a huge fan of Jeff I would say I’m a huge fan of Jeff. I have a huge crush on Meisha and only because she so badass. I would never want to diminish her incredible qualities. And I think I will do a good job as color commentator. And I am serious about taking a fight. I should fight at about 170. I should find away around some things because as soon as I decide to do this all of Mexico will become a pharmacy. Give me about 12 weeks and I will be a scary motherfucker.”