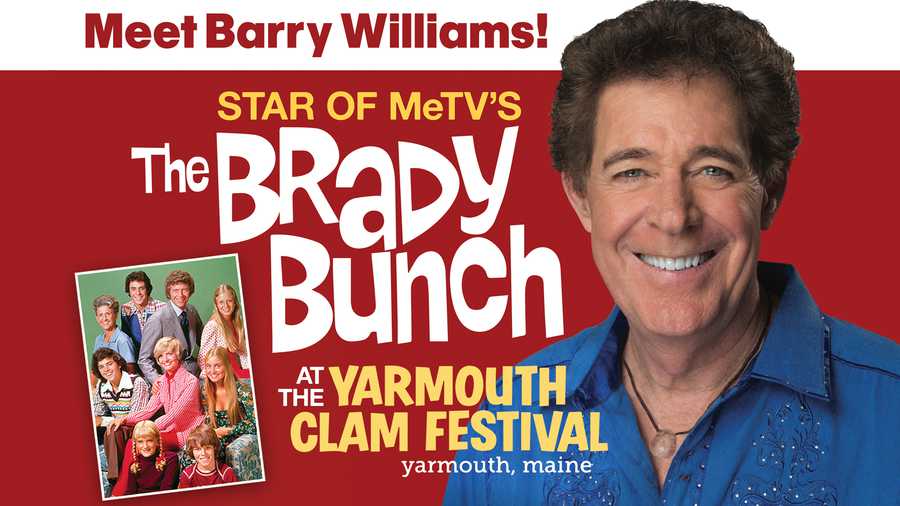 You will see him at the parade on Friday, July 19th. Then on Saturday, July 20th, Barry Williams will be at the Clam Shucking Contest and later in the day, you can meet him and get his autograph!

For more information on the Yarmouth Clam Festival, visit www.clamfestival.com.

MeTV is home to more than 50 different classic TV series each week, featuring comedies, westerns, dramas and science fiction. MeTV is always family-friendly, viewers of all ages can watch MeTV at anytime.

MeTV airs across Southern Maine on Spectrum channel 87, Comcast 175, Metrocast 299 and over the air using an HDTV antenna on WMTW channel 8.2 – Check your provider listings for additional channels in your area or visit our website at MeTV.com and click “Where to Watch”

Barry Williams is currently the spokesperson for MeTV, home of THE BRADY BUNCH. He has had an extensive career, starring in 100s of productions in Television, Movies, and Broadway. He made appearances in several Television shows including DRAGNET, ADAM-12, IT TAKES A THIEF, THE INVADERS, THAT GIRL, MISSION: IMPOSSIBLE, THE MOD SQUAD AND HERE COME THE BRIDES before landing his role as Greg Brady on THE BRADY BUNCH, for which he won the Young Artist Foundation Former Child Star “Lifetime Achievement Award” in 1989. He embraced his role and has appeared in various Brady Bunch TV movie reunions including A VERY BRADY CHRISTMAS, THE BRADY BRIDES, THE BRADY BUNCH VARIETY HOUR. He became involved in musical theater, starring on Broadway in PIPPIN and ROMANCE/ROMANCE. He has toured extensively throughout the country in National Tours of OKLAHOMA!, MUSIC MAN, SOUND OF MUSIC, CITY OF ANGELS, GREASE, WEST SIDE STORY and over 85 different musical productions.

Barry wrote his autobiography, GROWING UP BRADY: I WAS A TEENAGE GREG which stayed on the New York Times bestseller list for several months. Williams then Executive Produced the book into a NBC TV movie. He spent 5 years as a DJ on satellites’ SIRIUS RADIO, has recorded several CD’s and in 2013 starred in Syfy made for television movie BIGFOOT with Danny Bonaduce. Williams also wrote, co-produced and starred in 3 USO Christmas Shows, touring the world and bringing entertainment to our troops.