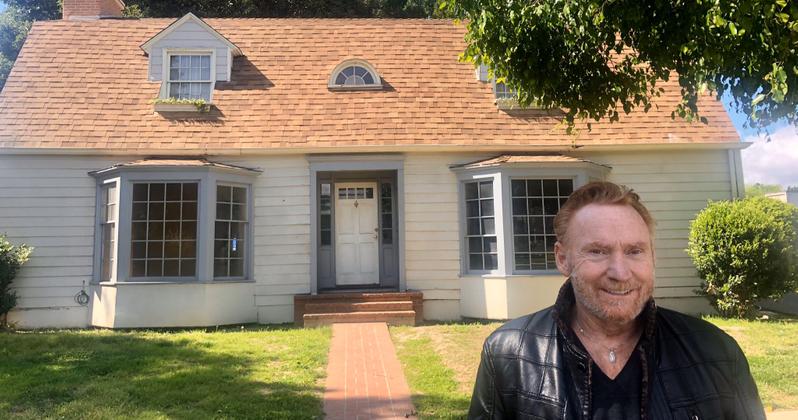 Nearly five full decades after he was first seen on television by American audiences, Danny Bonaduce has returned to the house his character lived in on the classic comedy series The Partridge Family. In the fall of 1970, The Partridge Family first premiered on ABC, striking big with viewers pretty quickly to become one of the most popular sitcoms of the ’70s. The success of the show also turned everyone in its cast into major television superstars overnight when it debuted, and almost fifty years later, Bonaduce is still acknowledging his claim to fame as a child actor.

Last month, Danny Bonaduce took a trip down memory lane by revisiting the original Partridge Family house as seen on the classic sitcom. As the building is not a real home and in fact a set located on the backlot of the Warner Bros. Studio Ranch, its design has changed slightly but still looks very much familiar. “The Partridge Family House! Can’t believe it’s been 50 years,” Bonaduce writes in the caption of a selfie posted in front of the building. It makes for an amusing photo seeing Bonaduce back home at the Partridge house as a 60-year-old man, with nearly five full decades passing since Bonaduce debuted on the classic television series. You can take a look at his selfie below.

The Partridge Family followed a single mother and her five children starting a rock ‘n roll band and taking their music on tour. Shirley Jones led the cast as matriarch Shirley Partridge, and along with Bonaduce as Danny Partridge, the other cast members included David Cassidy as Keith Partridge, Susan Dey as Laurie Partridge, Jeremy Gelbwaks (and later Brian Forster) as Chris Partridge, Suzanne Crough as Tracy Partridge, and Dave Madden as band manager Ruben Kincaid. At the time, the music featured on the program was immensely popular, even rivaling the popularity of The Beatles and Elvis Presley. The show would run for four seasons on ABC, spanning for 96 episodes overall before the network brought it to a close.

After The Partridge Family ultimately concluded its run in 1974, there has never been a full cast reunion. As Cassidy’s fame skyrocketed as a musician following his time on the show, he wasn’t always available for these kinds of reunions, though he appeared alongside Bonaduce, Crough, and Forster for a 2010 reunion on The Today Show. Meanwhile, Dey has consistently refused to participate in Partridge Family reunions over the past several decades, though she did call in for Bonaduce’s talk show Danny! in 1994 with other cast members present in the studio. As Madden, Crough, and Cassidy have all since passed away, a complete cast reunion will never come to be.

As for what Bonaduce is up to these days, the Danny Partridge actor can now be heard on the radio. Since 2011, Bonaduce has been hosting a morning talk/music show on the Seattle radio station KZOK-FM. To find out more, check out The Danny Bonaduce & Sarah Morning Show at kzok.iheart.com. The tweet shown above comes to us from Danny Bonaduce on Twitter.