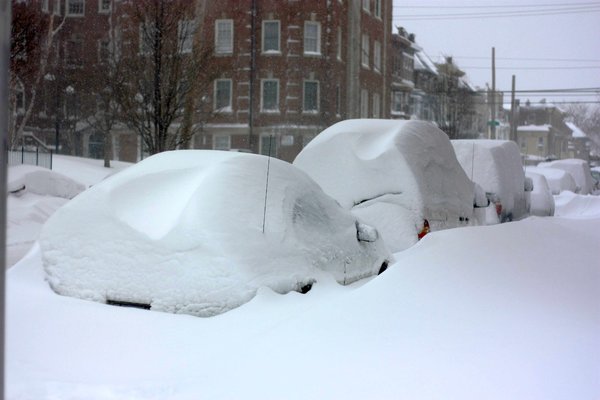 Inquirer Staff Writer
The great snowstorm of Feb. 5-6, 2010, is history – quite literally.

Officially, 28.5 inches was measured at Philadelphia International Airport, just shy of the all-time record and vaulting the winter of 2009-10 to No. 2 for snow in 126 years of record-keeping.

Unofficially, while it quieted the Saturday bustle and transformed the landscape spectacularly, it was about as disruptive as a weekend storm could be.

More than 70,000 people lost power in South Jersey, mostly in Cape May County. SEPTA shut down most of its operations by 2 p.m. Somehow, the airport remained open, but the runways were as forsaken as the city streets and the empty train stations, with most departing and arriving flights canceled.

Amtrak canceled trains; NJ Transit, buses. And unless you were shoveling or borrowing a neighbor’s snowblower, odds are that if you had any plans yesterday, they were canceled.

Just about anyone with an official title asked people to stay home, and at the end of the day Mayor Nutter decided to lead by example. He went home.

Now, if your arms are still sore from shoveling, you might want to skip the next sentence. Another significant snowstorm is possible Tuesday night and Wednesday.

But no panic before its time.

On with the colossal cleanup of this one. Although temperatures will stay in the 20s today and barely hit freezing tomorrow, the ever-stronger February sun should help with the road-clearing.

Road crews could use all the help they can get. Two-foot accumulations were common in the immediate Philadelphia area and to the south, with totals diminishing to a mere foot to the north. The official total of 28.5 inches is a stunning amount of snow for Philadelphia. In 94 previous winters, less than that has fallen during entire seasons.

Therefore, it was understandable that yesterday belonged to the snow, even on a Saturday that’s usually busy with shopping, errands, and assorted discretionary spending.

Save for the scrapes of plows and the beeping of backup lights, for one day, at least, the incredible sound-absorbing powers of snow muffled the noises of the modern world.

While a snowfall typically enchants ordinarily prosaic objects, this one went a step further by burying them, transforming patio furniture, trash cans, and even cars into so many cartoonish white humps.

The cosmically white cover stood routine on its head. At midafternoon, Rittenhouse Square looked more like a playground filled with overgrown children than one of Philadelphia’s most proper public venues. The roars of grown men playing football knee-deep in snow captivated passersby, who snapped photos of the men, one another, and their pets, in what was surely one of their more unusual days.

The sidewalks were desolate as the few pedestrians took to the car-abandoned streets. It was an excellent Saturday at the Reading Terminal Market. You could actually find a seat.

For anyone who needed to get somewhere, however, it was a colossal, cold headache.

Even though the airport remained open, no airlines were lining up to use the runways, spokeswoman Victoria Lupica said.

“Most of the airlines, including U.S. Airways, have ceased operations,” she said. “We’re expecting 100 percent flight cancellations,” with operations resuming sometime today.

About 400 staffers and 200 pieces of snow-removal equipment had been working nonstop since Friday evening. “Our snow-removal operations are continuous,” Lupica said.

Because so few planes came into Philadelphia on Friday, few passengers were stranded here.