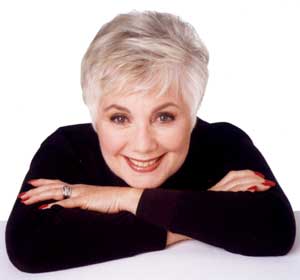 Shirley Jones and Gordon MacRae in 1955’s “Oklahoma!,” one of her early movie roles.

She has played a hard-luck prostitute (in the 1960 movie “Elmer Gantry”), an alcoholic nightclub singer (on TV’s “The Cleaner” in 2009) and, perhaps most daringly, Danny Bonaduce’s mom (in the iconic ’70s series “The Partridge Family”).

There isn’t much Shirley Jones hasn’t done in her long showbiz career, and while she’ll always be Mrs. Partridge to plenty of people, the Oscar-winning performer (for that turn in “Gantry”) is also still adored for such early film roles as Marian the Librarian in “The Music Man” and Laurey in “Oklahoma!”

Not one to rest on her six decades of achievement, Jones continues to perform. She’s in residence this week at the Welk Resorts Theatre in Escondido, with a show that mixes film clips, songs and stories.

Here, a conversation with one very busy 76-year-old.

Q: What’s your performing life like these days — and are you still enjoying it?

A: Oh yeah. I don’t have quite the energy I had when I was 25 or 35. Let’s say there are certain things I can’t sing today that I could sing when I was 25. But there are also things I can do today that I couldn’t do then (such as jazz songs in lower registers). I travel all over the country, everywhere. My son (Patrick) and I just did a huge Christmas show in Thousand Oaks. But this is my own show.

Q: What kinds of things can audiences expect?

I also show film clips, which the audience absolutely loves, because it’s me kissing every major movie star in Hollywood. People don’t realize I did over 30 movies before I did “The Partridge Family.” They like to ask questions and find out who was the best kisser, so I go into that, too.

The interesting thing is that people want to hear stories. I mean, I could stand up there and not sing a note and tell a story about every movie. So the responsibility of having the most beautiful voice that ever happened isn’t important anymore for me. They seem to want to just hear what I have to say.

Q: Has your “Partridge” renown been a kind of mixed blessing?

A: When I was offered “The Partridge Family,” it was a time when if you were a movie star, you just didn’t do television. It was a step down. That’s not the case now. But at that time, all the agents and managers and everybody said, “Shirley, do not do a television series, because if it is successful, your movie career will be in the toilet, and you’ll be known as that character for the rest of your life.” And that was true! (Laughs.) Exactly true

Q: And now you have how many grandchildren?

A: You’re not going to believe this, but I’m about to have 12! My youngest son, Ryan Cassidy, who just got married a little over a year ago, (will be a dad) in early March. And then Shaun (the 52-year-old former teen idol), who already has six children — three marriages, but six children — is having another baby, too, in May. I couldn’t believe it. I said, “Sweetheart, have you ever heard of a vasectomy?” (Laughs heartily.) So this’ll be seven kids for him. He said, “Mom, when I’m in my 70s is when he or she might be ready for college.”

Q: Do most of those grandkids know your movies and other work?

A: Oh yeah. My oldest is 29; she’s a college graduate. The second-oldest is 25. They go from 15 on down. My 12-year-old granddaughter is a singer as well. They just did “The Music Man” at her school. She auditioned for it — she didn’t tell me what part she got, she just said, “Come see the show, Grandma.”

And I went, and she came out and sang “Good Night My Someone” (as Marian). I tell you, I was just in tears. It was a great moment.