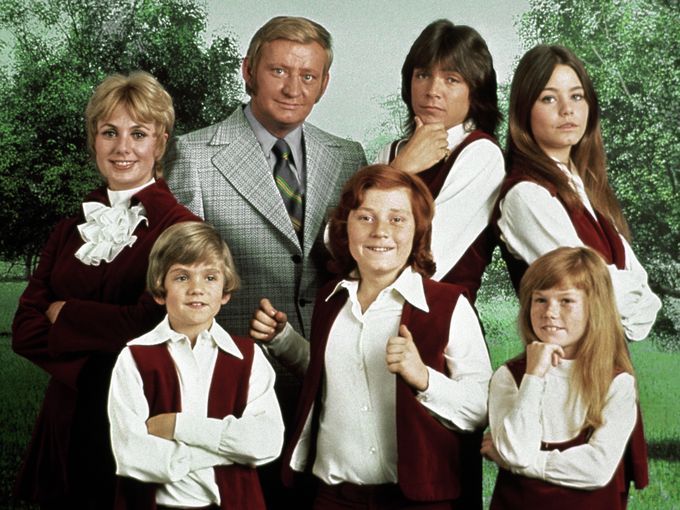 Cruise ships are no strangers to TV viewers. They’ve appeared over the years in dozens of comedies and dramas, especially popular in detective shows. More recently, they’ve served as locales for reality TV shows. Royal Caribbean ships, for instance, have appeared on shows from “America’s Best Top Model” to “Biggest Loser.” Check out these blast-from-the-past cruise ship TV appearances.

I Love Lucy: In the episode “Bon Voyage” (1956), Lucy (Lucille Ball) and Ricky (Desi Arnaz) are setting sail for Europe with Fred and Ethel, when Lucy manages to miss the ship. She ends up in a helicopter, hilariously being lowered onboard. As the helicopter hovers over the ship, you can see exteriors of the real S.S. Constitution, and while the interior scenes were done in a studio, the sets of the deck, bar and stateroom are good replicas – American Export Line paid to show off its ship. Later, cruising for American Hawaii Cruises, the ship appeared on Magnum P.I.

The Partridge Family: The early 1970s show about a musical family filmed an episode, “The Last of Howard” (1973), onboard the Sitmar ship Fairsea. The story line involves Laurie (Susan Dey) meeting a handsome guy who her brothers, Keith and Danny (David Cassidy and Danny Bonaduce), don’t trust. Shot at the ship’s pool, the song for the episode is When Love’s Talked About. The ship later sailed for Princess Cruises as the Fair Princess.

Columbo: In the 1975 episode, “Troubled Waters,” Lt. Columbo (Peter Falk), trench coat and all, takes his wife on a cruise to Acapulco. There is, of course, a murder – the ship’s female lounge singer is shot – and the ship’s captain asks Columbo for help. The episode was filmed aboard the Sun Princess. Robert Vaughn (The Man from U.N.C.L.E.) plays the bad guy.

The Love Boat: No TV show has done more to promote cruising than this one. Aired on ABC (1977 to 1986), the show featured multiple vignettes each week about shipboard love and romance and was filmed aboard the Pacific Princess or Island Princess on cruises to Mexico, the Caribbean and Alaska. Real passengers appeared with Captain Merrill Stubing (Gavin MacLeod) and his crew and a host of well-known guest stars (though some interior shots were done on a Hollywood set). Princess Cruises has made the most of the connection over the years. In November, MacLeod will be among six original cast members serving as godparents at the christening ceremonies for the line’s newest ship, the Regal Princess.

The A-Team: In a 1985 two-part episode called “Judgment Day,” the “crack commando unit” is trying to find the kidnapped daughter of Judge Mordente and track mobsters to Italy. The gang ends up on a cruise ship in the Mediterranean where several cast members pose as members of the crew. Perhaps most memorably, Mr. T (Baracus) plays shuffleboard. The ship, which appears in Part 2, is Carnival Cruise Line’s old Tropicale.

Baywatch: Buff bodies, bikinis and all, Baywatch took an Alaska cruise in 1998 for a three-part season finale, “Bon Voyage,” filmed aboard the Dawn Princess. The storyline has the gals doing a photo shoot for a sports magazine and the guys winning a contest that happens to be for the same cruise. Real passengers appeared as extras with David Hasselhoff and Carmen Electra among series stars onboard.

Undercover Boss: Norwegian Cruise Line has gotten a lot of positive play out of ex-CEO Kevin Sheehan’s appearance on this reality show in 2011. On the episode, Sheehan goes undercover as an unemployed NYC cab driver trying out for a crew spot — he wears dark nerdy glasses and a red beard as a disguise. The goal: To learn about the crew experience firsthand. Real changes resulted from the appearance. The show was filmed aboard the Norwegian Epic cruising from New York and the Pride of America in Hawaii.

Love for Sail: This 2012 Lifetime dating reality show has singles romping around the Norwegian Epic, Norwegian Pearl and Norwegian Star in episodes such as “I Want a Real Man” and “Smooth Moves.” Only nine episodes were filmed, but amidst onboard dates, excursions and parties the series did manage to favorably show off Norwegian Cruise Line’s The Haven suite complex, spas, lounges, pools and other shipboard facilities.

Top Chef: Celebrity Cruises has established a relationship with the hit Bravo TV show Top Chef, that includes theme cruises. It all began with Top Chef: Seattle in 2012, with an episode filmed aboard the Celebrity Infinity and Celebrity Millennium in Alaska. The chef’testants are seen toasting with umbrella drinks on deck, cooking in the galleys and dining along with judges including Padma (Lakshmi) in the specialty restaurant Qsine. The challenges, amidst scenes of glaciers, include cooking with iceberg lettuce.

Rock This Boat: New Kids on the Block. While it may be too soon to call this reality series iconic — the show debuted in just this year— the show follows exuberant NKOTB fans cruising with the boy band on their annual sailing. TV Guide Channel ordered up eight episodes, which were filmed aboard the Carnival Splendor in June of 2014.