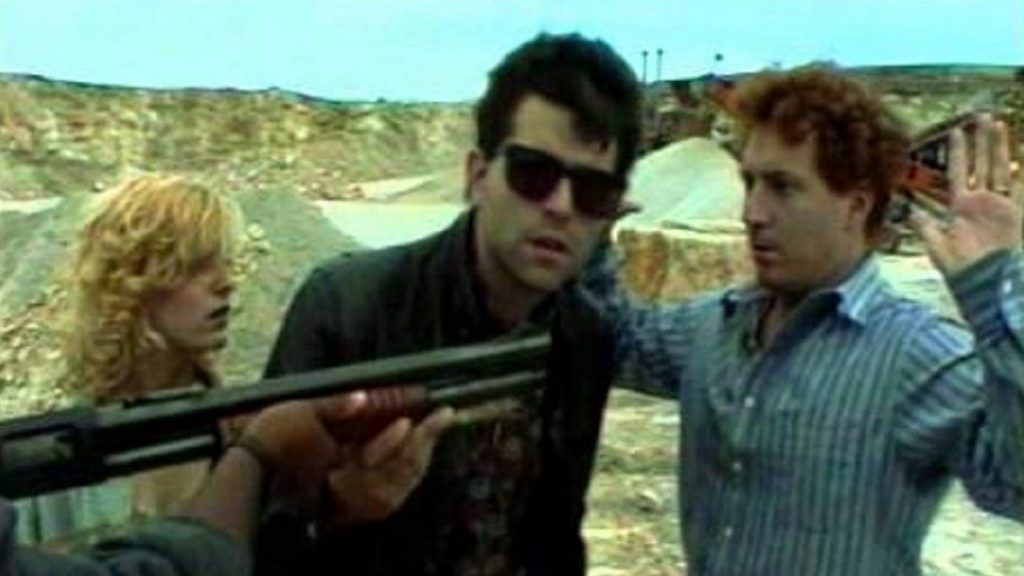 fangoria.com – May 10, 2016 – 4:33 pm – by: Michael Gingold
AMERICASDEADLIESTDVDREVWith YouTube and other vehicles for video self-expression a decade or so away, AMERICA’S DEADLIEST is informed more by the true-crime show COPS and its ilk (most directly during its wickedly ironic climax). Former child star Danny Bonaduce plays Dougie, a nebbishy guy who uses a newly purchased video camera, though which the entire movie plays out, to annoy his wife Debbie (played by Bonaduce’s real-life spouse Gretchen). After he and we discover her boinking another guy, Dougie decides to hit the road, recording his travels across the Midwest. This leads him to accidentally videotape a trio of criminals disposing of evidence, and when their leader Clint (Mick Wynhoff, who also produced) sees the camera pointed their way, he decides not to kill Dougie, but kidnap him and press him into service to preserve their exploits for posterity.

One of the few late-’80s/early-’90s shot-on-video features to truly turn the medium to its advantage, AMERICA’S DEADLIEST HOME VIDEO remains a potent use of the format as well as an unsung groundbreaker in the found-footage field.

Back when it was first released in 1993, AMERICA’S DEADLIEST was not only the “chilling surprise” yours truly is quoted as calling it on the cover of Camp Motion Pictures’ new DVD (a special, limited VHS edition is also available). It was an ahead-of-its-time application of the vérité-video form to the horror/crime genre, using the handheld look to its advantage. At the time, movies lensed on consumer VHS or—like this one—Hi-8 were looked down on by all but the most rabid genre fans, and much of the filmmaking/distribution community (including George Lucas, according to writer/director Jack Perez on one of the disc’s commentaries) didn’t get what these filmmakers were up to. Today, mock-doc thrillers are everywhere, but Perez and co. got there first, and did it better than many who succeeded them.

AMERICA’S DEADLIEST HOME VIDEO also anticipates the quest for reality-show fame that would soon overtake the media. Anxious to be notorious—he refers to his little group as “The Clint Dryer Gang”—this villain isn’t interested in taping his crimes to enjoy later, as in HENRY: PORTRAIT OF A SERIAL KILLER (with which this movie shares special-makeup creator Jeffery Lyle Segal). He wants to build his rep with the footage, to become infamous like his hero Clyde Barrow, and functions as a sort of director as he instructs Dougie in what and how to tape, and ultimately to take part. Meanwhile, Dougie takes a shine to Clint’s reluctant girlfriend Gloria (Melora Walters), while foul-tempered henchwoman Vezna (Mollena Williams) just wants to bump him off. And as we watch, their misdeeds become increasingly brazen and horrific, staged in tense, well-judged long takes incorporating convincing FX and, for one gag, clever use of twin actresses.

Perez, whose subsequent films include the first-rate satirical psycho saga SOME GUY WHO KILLS PEOPLE, injects considerable black humor into the scenario, some of it stemming from the nature of its visual storytelling (particularly a great punchline to an otherwise disturbing bedroom-bondage setpiece). The four leads give very naturalistic performances even as their characters and emotions are heightened, and the lensing is rough enough to suggest something shot by nonprofessionals while avoiding the shaky-cam approach that made some of its successors hard to watch. As such, the DVD transfer has not been unnecessarily slicked up, looking just like something one might see on a videocassette uncovered back in the early ’90s.

On his commentary, Perez reveals that footage he himself randomly found, along with an early job shooting and editing travel videos, helped guide his choice of aesthetics when Wynhoff offered the opportunity to make his first feature—albeit on video with a $7,000 budget. Recalling the “crusader” spirit that got them through the production, Perez offers a thorough recollection of the development and creation of AMERICA’S DEADLIEST, how it was made to look unfinessed and the advantages of shooting in Wynhoff’s Wisconsin hometown (plus a funny story about a local newspaper article).

Wynhoff speaks on a second commentary and right away dishes a bit of dirt on Bonaduce, going on to reveal things you might have suspected (Bonaduce wasn’t actually there for many scenes where he’s supposedly behind the camera) and some you might not have (Linnea Quigley was initially approached for the Gloria role). Offering enough of a different perspective from Perez to make his track worth a listen, Wynhoff also shares a number of personal anecdotes—no more personal, or entertaining, than when he recalls “freaking out” about doing the aforementioned kinky sex scene.