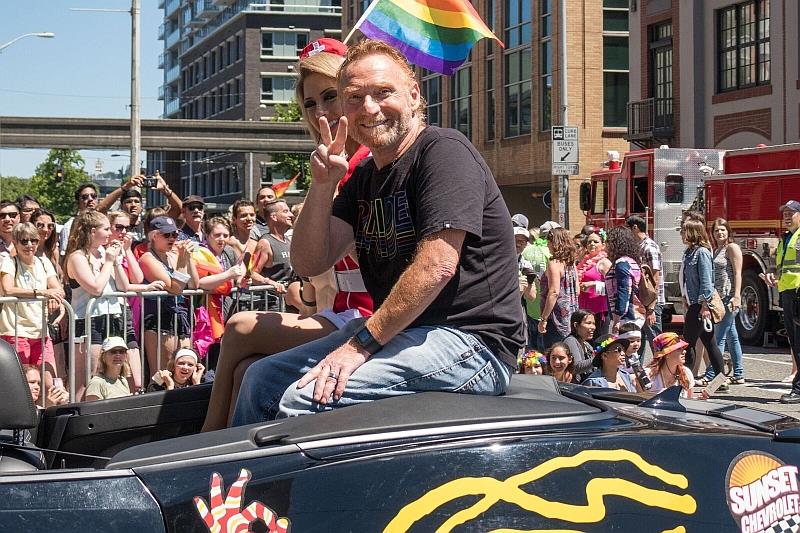 Organizers say in light of the recent tragedy in Orlando, celebrating pride showcased the city’s ability to celebrate unity.

Music, costumes and cheer filled the streets of downtown Seattle for the annual pride parade. Bright and colorful floats stood out among the crowd, but so did this one from Entre Hermanos, with pictures of the lives lost in Orlando after a mass shooting earlier this month at pulse, a well-known gay night club.

The Fitts family is from Orlando but wanted to stand in solidarity with their hometown during their visit to Seattle.

“To think about the 49 lives lost in our home state- can’t help to think about that and just hope that something like that doesn’t happen again,” said Jennifer Fitts.

It’s a sense of unity that even brought out elementary students Mikela Gibbs and Maddey Hill, who wanted to show the message of love transcends all ages.

“You should not be killing people, you should be loving people,” said Hill.

“I’m kind of a mixed mood because I’m sad that the people in Orlando were killed and I’m happy here to support pride,” said Gibbs.

While thousands came to show support for the pride parade and stand in solidarity, some came holding signs denouncing homosexuality.

However, soon the cheers drowned out anyone getting in the way of celebrating as supporters partied with leaders like Seattle Mayor Ed Murray and Governor Jay Inslee along with the Sounders team showing where Seattle stands on pride and unity.