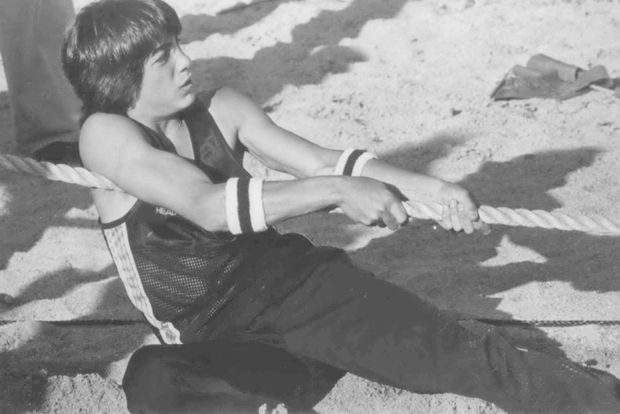 To younger viewers, this week’s debut of ABC’s “Battle of the Network Stars” might seem like a natural outgrowth of today’s three-pronged obsession with celebrity, unscripted TV and prime-time competition shows. But as viewers of a certain age can tell you, the idea is anything but a new one.

For 12 years from 1976 to 1988, TV stars from all three major networks — ABC, CBS and NBC — laced up their sneakers for a series of 19 such primetime athletic contests. Usually airing during spring and fall sweeps weeks, they pitted the likes of Farrah Fawcett (“Charlie’s Angels”), Gabe Kaplan (“Welcome Back Kotter”), Jamie Farr (“MASH”) and William Shatner (“Star Trek”) in a variety of events, ranging from track-and-field contests to a dunk tank — which was a convenient way to get the likes of Heather Locklear (“The Fall Guy,” “TJ Hooker”) into a bathing suit.

Above photo: Scott Baio of ‘Happy Days’ competes in a tug-of-war in a 1980 episode of the ABC series ‘Battle of the Network Stars.’ (File image) Below: Heather Locklear (left) of ‘T.J. Hooker’ and Heather Thomas of ‘The Fall Guy’ were among the bathing-suited stars to appear in the notorious dunk tank of ABC’s original ‘Battle of the Network Stars.’ Here, the two are pictured in 1982. (File image)

Serving as commentator: none other than “Monday Night Football” icon Howard Cosell.

The whole thing was shallow but fun, a bit of light, guilty-pleasure viewing that could be relied upon to deliver ratings — until, of course, it couldn’t anymore. (It even spawned an animated spinoff of sorts in Scooby-Doo’s “Laff-A-Lympics,” airing on Saturday mornings back when Saturday-morning cartoons were a thing.)

Now, proving that no idea isn’t beyond revisiting, ABC is bringing it all back, with a new series that will pit such competitors as Danny Bonaduce (“The Partridge Family”), Tom Arnold (“Roseanne”) and Anson Williams (“Happy Days). Along for the ride are a handful of stars who competed in the original series, such as Willie Ames (“Eight is Enough”), Ted Lange (“The Love Boat”), Jimmie Walker (“Good Times”) and Lou Ferrigno (“The Incredible Hulk”).

Although the idea is a recycled one, not everything will be the same this time. For starters, instead of being a one-time special, the new “Battle of the Network Stars” will be a full-on series, with two teams of five actors competing each week. What’s more, each team will be grouped thematically. For example: Week 1 will feature a “TV Sitcoms” team (Bronson Pinchot of “Perfect Strangers,” Tom Arnold of “Roseanne,” Dave Coulier of “Full House,” AJ Michalka of “The Goldbergs” and “Tracy Gold of “Growing Pains”) against a “TV Kids” team (Joey Lawrence of “Blossom,” Corbin Bleu of “High School Musical,” Nolan Gould of “Modern Family,” and Lisa Whelchel and Kim Fields of “The Facts of Life”).

In addition, it will feature past and present stars of shows mostly from the ABC/Disney family instead of from across the network spectrum. Also, in lieu of the late — and frankly irreplaceable — Cosell, announcers will be Mike Greenberg and Joe Tessitore of ESPN, owned by ABC/Disney.

With the premiere of the show set for this week, we thought it would be fun to dive into the archives for a look back at the original series. Below find photos from the original “Battle of the Network Stars” — including of that notorious dunk tank, which will return in the new series — as well as of its CBS cousin “Circus of the Stars.” Just for good measure, we’ve also thrown in a brief look at the new “Battle of the Network Stars.”

You can also watch for the new “Battle of the Network” stars at 8 p.m. CT Thursday (June 29) on ABC.

The original ‘Battle of the Network Stars’

Gary Sandy of CBS’s ‘WKRP in Cincinnatti’ paddles for all he’s worth in a 1980 episode of ABC’s ‘Battle of the Network Stars.’ (File image)

Kathy Maisnik of ABC’s ‘Star of the Family’ (left), Jameson Parker of CBS’s ‘Simon and Simon’ and Joan Van Ark of CBS’s ‘Knots Landing’ compete in a relay race in a 1982 episode of the ABC series ‘Battle of the Network Stars.’ (File image)

Mark Harmon of ‘Flamingo Road’ (left) and Robert Walden of ‘Lou Grant’ compete in the obstacle course competition in a 1982 episode of ABC’s ‘Battle of the Network Stars.’ (File image)

Heather Thomas of ‘The Fall Guy’ (left) and Telma Hopkins of ‘Bosom Buddies’ try to catch a football to score points for their ABC team of stars in a 1982 episode of ABC’s ‘Battle of the Network Stars.’ As with most installments, the two-hour special was hosted by Howard Cosell. (File image)

A video look back at the original ‘Battle of the Network Stars,’ featuring Melissa Gilbert and Kristy McNichol.

Scenes from the dunk tank: Actress Audrey Landers of ‘Dallas’ participates in the dunk tank event in a 1982 episode of ABC’s ‘Battle of the Network Stars.’ Landers ended up being dunked three times in the episode. (File image)