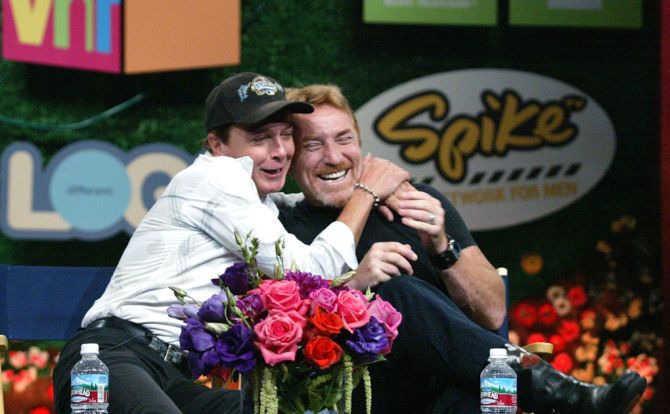 David Cassidy’s death has millions of fans in mourning, but few people have been as touched so personally by the loss than Danny Bonaduce. As reported by King 5, Cassidy’s Partridge Family co-star has been vocal about his close friendship with his TV brother who died of organ failure last week at age 67. Now, Danny Bonaduce tells the morning show on KZOK-FM that David Cassidy was “a brother” to him and responsible for his own career in radio.

Danny Bonaduce co-starred with David Cassidy on The Partridge Family from 1970 to 1974. While the stars had a nine-year age difference and little in common when the musical sitcom was on the air (Danny was just 10-years-old when The Partridge Family debuted on ABC, while David was 19), the two stars became very close over the years, even weathering through Danny’s highly publicized legal troubles.

“David wanted nothing but the best for me,” Bonaduce told KZOK. “And I gave him a run. I made things difficult for him to be kind to me. I got into a lot of trouble. A lot of embarrassing things.”

After a series of headline-making arrests in the 1990s, Danny Bonaduce said he received a phone call from David Cassidy which prompted him to change his life for good.

“David called me up one day and said ‘You are the funniest guy in the world, but now you are the joke. Don’t be the joke.’”

During the sobering phone call, David Cassidy suggested that Danny Bonaduce go on tour with him, but his condition was that Bonaduce had to show up on time and sober. A hesitant Danny Bonaduce eventually agreed, and now he credits David Cassidy with helping him get sober after his 25-year-old battle with drugs and alcohol.

In fact, Bonaduce, who has since enjoyed a long career in radio on stations in Chicago, Detroit, Los Angeles, Philadelphia, and Seattle, also credits his entire career in radio to his Partridge Family big brother.

“David said that I would get a job out of it and I did. I’ve been on the radio ever since,” Danny said.

While David Cassidy always looked out for him, Danny also had David’s back in the months before the ’70s teen idol’s death. Earlier this year when Cassidy revealed he was suffering from dementia, Danny Bonaduce told Extra’s Mario Lopez that he tried to contact David because he mistakenly thought he had gone off the wagon. At the time, fans speculated that David Cassidy was intoxicated at one of his final concerts because he fell while onstage and was slurring his words. Danny told Extra he had plans to “yell at” Cassidy over the phone, but he was unable to get a hold of his longtime friend.

“I’m so glad I didn’t get through because that’s when I found out it wasn’t booze, it was dementia,” Danny told Extra.

After David Cassidy’s death was announced last week, a broken-hearted Danny Bonaduce took to Twitter to reflect on his 48-year friendship with the late superstar.

“I have known, loved, and admired David Cassidy for 48 out of my 58 years,” Bonaduce tweeted. “He has been as kind to me as any real brother could ever be. We’ve been through a lot together and he was always there for me. This loss is huge. RIP my dear friend.”

Danny Bonaduce told KZOK David Cassidy always went out of his way for him and that he misses him terribly.

“David went out of his way to tell me how much he loved me,” Danny Bonaduce told KZOK. “I’m really sorry that guy is gone.”

Take a look at the video below for more on the friendship between Danny Bonaduce and David Cassidy.